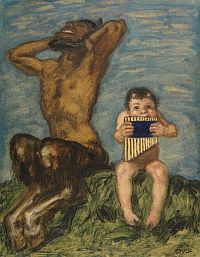 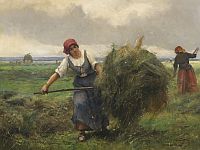 Julien Dupré
Heuernte
Oil on canvas, about 1890-1895
46 x 61,5 cm
Estimate: € 30.000-40.000
Munich, 2 October 2017, (kk) – No matter whether earsplitting or heartbreaking – it's the good will that counts. In Franz von Stuck's oil painting "Dissonanz" the teacher is in great need of a strong will, while it is hard for the observer to refrain from smirking. The likeable motif will be called up in the auction of 19th Century Art at Ketterer Kunst in Munich on 24 November.

Suspense in the salesroom is guaranteed when Julien Dupré's "Heuernte" will be called up Estimated at € 30,000-40,000, the motif is one of the artist‘s most popular ones. Unlike it is the case with his role model Jean-François Millet, Dupré did not put the arduous farm labor in the focus of his paintings. The young farm girl on the sun-filled field seems jaunty, the glistening hay reflects the sunlight and creates an impression of easiness. Solely the turned-up sleeves and the strong body that jams the pitchfork into the stack of hay suggest the labor's physical effort.

Works from Karl Hagemeister, who contributes several objects to the auction's range of offers, mirror the extraordinary charm of landscape depictions. The two top works are the two oil paintings "Herbst III" and "Meereswogen" that will be called up with an estimate of € 25,000-35,000 each.

Jean-Léon Gérôme's oil painting "Arnaute buvant" from 1856 will enter the race with the same estimate. It is a document of the artist‘s weakness for oriental subjects and his fascination for a hyperrealistic style showing details in an almost photographic precision. The "Arnaut" is an Albanian mercenary in service for the Osman Empire. They came to Egypt in the late 18th century to fight the French troops and found a new home there. The best known variant of the theme presumably is Gérôme‘s painting "Arnautes jouant aux échecs", today in possession of the Wallace Collection in London.

Another top name is Ludwig Adrian Richter, one of the 19th century's most acclaimed German illustrators, who is represented with an oil painting that presumably remained unfinished owed to an eye disease. His work "Hirten am Feuer (Abendlandschaft)", which will be called up with an estimate of € 15,000-20,000, emanates a deep and calm love for nature.