Graphic Art: A German Private Collection
Expressionism at its best 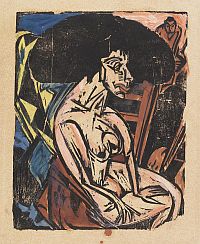 Ernst Ludwig Kirchner
Drei Akte im Walde, 1933/34
Color woodcut, (15.3 x 23 in)
Estimate: € 40.000-60.000
Munich, 5 April, 2017 (kk) - The small but fine collection of a German art lover offers nothing less but extraordinary works of art. The selection, which has a focus on expressionist works by the "Brücke artists", will be called up in context of the Ketterer Kunst auctions from 8-10 June in Munich.

"I was totally blown away", is how the collector describes his feelings when he saw paintings by Karl Schmidt-Rottluff for the first time upon a visit to the 'Frankfurter Kunstkabinett' shortly after World War II. He fell for his rough woodcut style. In the following he developed a liking for works from other members of the artist group "Die Brücke" as well. He was fascinated by their style, especially as it was so different from everything that had been considered "beautiful" by then. Together with his wife, who was particularly taken with the works by Otto Mueller, he visited scores of exhibitions.

It didn‘t take long before they would not settle with just viewing any longer, eventually the couple bought its first expressionist work, Ernst Ludwig Kirchner‘s "Drei Akte im Walde", in 1962. The auction at the 'Stuttgart Kunstkabinett' of Roman Norbert Ketterer, uncle of Robert Ketterer, today owner and managing director of Ketterer Kunst, marked the beginning of a marvelous collection characterized by great passion.

The former businessman bought another sheet from the Kirchner estate from Roman Norbert Ketterer: the hand-colored woodcut "Die Geliebte" from the portfolio "Bilder zu Peter Schlemihls wundersamer Geschichte von Albert von Chamisso" from 1915. Both works will be called up in context of the summer auctions with estimate prices of € 40,000-60,000 and € 100,000-150,000 respectively.

"I am delighted", says Robert Ketterer, "that now the circle closes and that we have the wonderful opportunity to offer the Kirchner works that once were acquired from my uncle, as well as 30 other gems from a collection compiled with outstanding expertise and passion". Every single item from the range has some sort of unique character, as the collector put strong focus on works of which only very few copies were made, we also find trial proofs or works that have something special to them, such as an additional coloring.

Previews in Germany and Switzerland