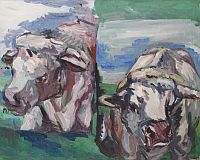 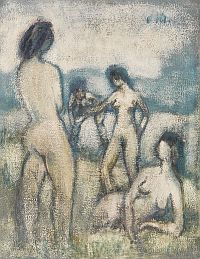 on 1) Modern Art
The number one spot in the department is currently held by Otto Mueller's work "Vier Badende" that has been estimated at € 300,000-400,000. This work, presumably made as early as in 1910, is one of the multi-figure nude scenes by the artist that are highly sought-after on the global auction market. Otto Mueller reduced these composition to a natural simplicity. His figures freely move about a meadow, fully aware of their physicality and entirely untinged by any doubt in their existence. The aspect of the seemingly unreachable unconstrained idyl amidst the bustle of an ever new and progressive urban setting makes this work more topical than ever.

A bit more, € 200,000-300,000 to be exact, has been tagged to Hermann Max Pechstein's oil painting "Ronmay" from 1917. It shows the daughter of the chief of Palau, who impressed the artist just as much as the beautiful landscape of the South Sea islands did. The portrayed lady's exotic appeal, the lucent colors and the expressive stroke of the brush must have been reason enough for the US director Josef von Sternberg to buy the work while he was on location in Berlin to make the movie "The Blue Angel" with Marlene Dietrich. Until 1949 the work was part of his acclaimed collection and was presented to the public in several exhibitions.

While Heinrich Maria Davringhausen's painting "Krieg" (estimate: € 100,000-150,000) from 1914 illustrates the destructive forces of war, Emil Nolde's Northern German landscapes emanate peace and energy at the same time. Next to his "Marschlandschaft mit Bauernhof" (estimate: € 80,000-100,000) and the watercolor "Nordfriesische Landschaft mit Bauernhof" (€ 140.000-180.000), around a dozen more works by the remarkable artist will be called up. 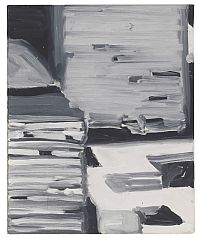 With an estimate of € 500,000-600,000 the work "Zwei halbe Kühe2, painted by Georg Baselitz in 1986, is among the leading works in this department. The artist reduced the familiar animal motif to an essential basic structure, in order to attain maximum artistic freedom. The familiar provides a safe basis from which the artist dared to make an epoch-making step. Accordingly, this work counts among the so-called 'Fracture Pictures' which in a way marked the transition to the up-side down paintings that would earn Georg Baselitz global recognition.

1968 is also the year of origin of Gerhard Richter's "Stadtbild", quasi the same time his famous work of the Milan Cathedral Square was made. Sold at a price of 29 million it was long considered the artist's most expensive painting. The "Stadtbild" is part of the artist's early black and white period of creation in the 1960s, which, next to the work phase of the "Abstract Pictures" as of 1976, fundamentally shaped today's perception of Gerhard Richter's artistic creation. Works from this period count among his most sought-after works on the global art market. The estimate is at € 300,000-400,000.

Alongside Serge Poliakoff's oil painting "Composition abstraite" from 1958, which has been estimated at € 250,000-300,000, Willi Baumeister contributes a fascinating work from his significant Montaru-Series that is estimated at € 150,000-200,000. That same price is also tagged to "Squares: Blue and Cobalt Green in Cadmium Green" by Josef Albers.