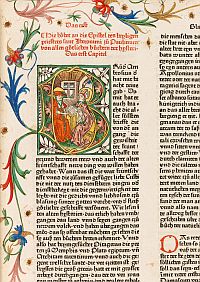 Following the course of the very successful evening sale, a concept unique on the German auction market, which is accompanied by an extra high-quality catalog, the main auction will also gain in importance. The presentation of all objects in the catalog will be even more appealing. Along with a high-class photographic presentation, more room for every single book allows more elaborate descriptions. Additionally, it is going to be the first time that the entire range of offerings will be called up during just one day and one evening. A separate online auction with around 200 objects will be held on 23 May.

Carrying an estimate of € 140,000, the array of offers is led by the first illustrated bible in the history of printing. With the "Biblia germanica", published by Günther Zainer in Augsburg in 1474, a magnificent copy of the third German bible with scores of picture initials in old coloring will be called up.

Another top lot is "Itinerario", it is the very rare first English edition of the famous travelog from Jan Huygen van Linschoten. The renowned handbook for seafarers to East India takes its readers on a journey around the world on 460 pages. It is one of the most acclaimed geographic works of its times, it also was of crucial importance for the Dutch expansion in Asia, not least for the copper maps that show the way to East India. They were the first reliable source for access to the region. Linschoten was able to prepare the maps with the help of sea maps that the Portuguese had kept a secret for more than a century. This edition is particularly attractive as it comprises the mostly lacking map of the Molucca Archipelago, the so-called Spice Islands, endowed with illustrations of various spices in the lower margin. The estimate is at € 70,000. 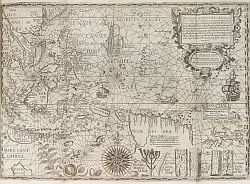 Jan Huygen van Linschoten
His Discours of Voyages, 1598
Estimate: € 70.000
Adolph von Menzel's monumental work "Die Armee Friedrichs des Großen in ihrer Uniformierung" will enter the race with an estimate of € 50,000. Merely 5 from the total of 30 copies of the book with 436 lithographs, published between 1851 and 1857, were intended for commerce. The other copies were gifts for various European royal houses. This working copy with 253 colored original drawings from the estate of professor Fritz Werner, Menzel‘s famous student, assistant and friend, has long been disregarded by research.

The incunabula section offers two remarkable copies of the "Liber chronicarum". With more than 1800 woodcuts, the world-famous Nuremberg Chronicle was the greatest book project of its time. While the estimate for the entirely colored copy is at € 60,000, the partly colored version is offered with an estimate of € 25,000.

The first edition of one of Portugal's most significant works is extremely rare, as not even ten copies can be found in public libraries around the globe. In "Chronica do felicissimo rei dom Emanuel", made 1566-67, Damião de Goes, humanist, globetrotter and diplomat, delivers one of the first accounts of Portugal's Golden Age under Manuel I and the discovery of Brazil. The estimate for this first edition is at € 20,000. 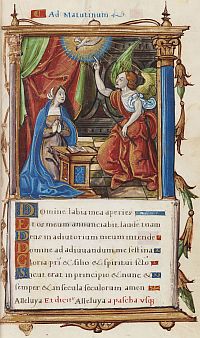 Book of Hours
Parchment manuscript, Paris around 1520,
Estimate: € 15.000
Another lot guaranteed to increase the thrill in the saleroom is a Parisian Book of Hours that has been estimated at € 15,000. The marvelously preserved manuscript with a total of 17 miniatures is particularly captivating for its elegant Antiqua hand in classic Renaissance style.

Next to the "Fluxus Testament" (estimate: € 18,000), a theological print from 1747 endowed with inventive India ink drawings and Chinese characters by Nam June Paik and the rare complete copy of the de-luxe edition of Harry Roskolenko's "Paris Poems" (estimate: € 10,000) with lithographs by Zao Wou-Ki, a copy of the famous poetry collection "Umbra Vitae", of which only 500 have been published, will be called up with an estimate of € 8,000. This important publication counts among the main works of the art of expressionist book illustration in Germany. The entire get-up of the book, including the woodcuts on the cover and on the endpapers, has been made by Ernst Ludwig Kirchner. It is the result of his intensive occupation with the poems of Georg Heym. The same price has been tagged to René Char's "Ŕ la santé du serpent". The unusual book in snakeskin binding was made in Paris in 1954 and is one of just three copies from the absolute de-luxe edition for René Char with the original lithograph signed Jean Miró.

The section of autographs offers a Strasbourg Album amicorum (estimate: € 2,000) from the possession of Margaretha Beltzer with an entry by Friederike Brion, Johann Wolfgang von Goethe's first big love, as well as two autographed letters by Theodor Fontane. In 1851 the author wrote an extensive account of his financial problems, the trouble he had with his publisher, but also about the birth of his first child to his friend Friedrich Witte, pharmacist and later Member of the Reichstag. The estimates for the two letters are at € 4,000 and € 3,000 respectively.