Uschi Ackermann's and Pug Sir Henry's Perfume Bottles at Ketterer Kunst
A Sensational € 120,000 for a Good Cause 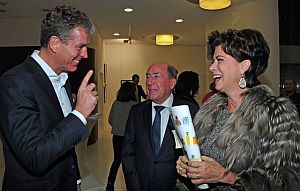 Prior to the auction:
Auctioneer and host Robert Ketterer joking with Anita and Erwin Müller , owners of the drugstore chain of the same name.
Photo: Ursula Dornberger-Düren
Munich, 8 December 2016 (kk) - The atmosphere was great, the success terrific. Yesterday Robert Ketterer, auctioneer and owner of Ketterer Kunst, sold what presumably is the biggest private collection of large-size factices of perfume classics for a fantastic total of around € 120,000. Compiled by Uschi Ackermann, public relations specialist and owner of Sir Henry, Germany's most famous pug, proceeds of the around 300 flacons will go to VITA, an organization that trains assistant dogs.

The rush on the charity auction was tremendous. The list of celebrity guests was long and included, apart from the Who's Who of the German media scene, names like Princess Alexandra von Hohenzollern, Chiara Ohoven and Sophie Wepper and her husband David Meister. Anita and Erwin Müller, owners of the drugstore chain of the same name, did not miss out on this event, either. Other guests were Stefan Mulder, vice president of Lornamed Europe, Sibylle Schön of Aigner as well as Yvonne and Dr. Eric Schulte, owners of the cosmetics series QMS.

Perfume lovers came from near and far as this was a one-time occasion as many of the noble decoration bottles are no longer available as perfumes. Experts in the perfume business came from Berlin, Hamburg, Ulm and the rest of Germany, as well as from Kitzbühel, Marbella, Nice, Vienna and Zurich – to name just a few places.

The large number of bidders in the salesroom did not miss the chance to prove their generosity. On top of flacons by Chopard (lot 100), Salvador Dalí (lot 45), Guerlain (lot 83), Elisabeth Taylor (lot 87) and Vivienne Westwood (lot 97), each sold for € 5,000, the perfume classic "Chanel N° 5" (lot 43) made for the highlight of the evening. While half a dozen written bids had already been placed for the noble bottle beforehand, the price rose quickly and it needed a bid of € 8,000 from a perfume lover who had come all the way from California to stop the race. A total of 17 of the 289 scent bottles were sold at prices in four-digit realms. Everyone realized that the event was about both unique cult objects as well as a good cause.

Uschi Ackermann has been involved with the VITA assistant dog organization for a couple of years. "Just as it was the case with the perfume bottles, it was love at first sight with the dogs, too" the widow of Gerd Käfer, delicatessen king and organizer of legendary party events, recalls. "I met the eleven-year old Ben Neumann and his VITA-trained dog Quest at an event organized by VITA and was deeply impressed by both of them from the start. It's the way that the dog makes Ben happy that inspired me to donate the proceeds of my collection to the organization".

Robert Ketterer felt the same when he met Ben, who, by the way, opened the auction with a wonderful speech. Enthusiastic about the idea of this charity auction, the auctioneer hosted the evening with a lot of charm and motivated the audience to ever new bidding heights. "I am utmost happy that we were able to realize this impressive result with such an unusual auction“, says Robert Ketterer. He continues: “The assistant dogs do not only facilitate everyday life for many people, they are also loyal friends and an invaluable support. That's why I am very glad that our donation will assist VITA in the great job they are doing".

Since it was founded in 1954, Ketterer Kunst has been on the forefront of auction houses dealing in Fine Art and Rare Books, with its headquarters in Munich, and a branch in Hamburg. Representatives' offices in Berlin, Heidelberg, Dusseldorf, the Benelux Union, France, Switzerland and the US have contributed substantially to the company's success. In addition, exhibitions, special thematic and charity auctions as well as monthly online auctions at www.ketterer-internet-auction.com are regular events at Ketterer Kunst. Robert Ketterer is owner and CEO of Ketterer Kunst.