December Auction: Post War and Contemporary Art in Germany
USA in the Focus 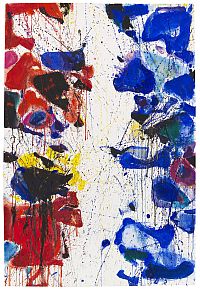 With an estimate of € 250,000-350,000, one of the top lots in the section of Post War Art is Helen Frankenthaler's large-size work "Marchioness". It is a real rarity on the European auction market (see separate press release).

Sam Francis is even represented with five works from a higher-priced segment, the two gouache and water-color works "White line" and "Over orange" from the late 1950s are particularly captivating. The two objects in portrait format with their strong and brilliant color contrasts are characterized by the composition's poetry and have been estimated at € 150,000-200,000 each.

In the section of Pop Art the sought-after motif "Bedroom Collage" (estimate: € 25,000-35,000) from Tom Wesselmann, which is of a unique character owed to the collage work, as well as Roy Lichtenstein's "Yellow Vase" part of the "Interior series" from 1990 are especially worthwhile mentioning. The latter shows a deserted living space as a symbol of a reduced expression of modern life in America. The artist examines the classic genre of interior scenes which became established as an independent genre through Dutch 17th century painting, and makes the classic choice of motif subject to his modern style. The estimate is at € 60,000-80,000.

The top lot in the section, however, comes from Günther Uecker, a German artist whose oeuvre has become quite popular in the international art scene. The impressive "Spirale III" from 2002, estimated at € 400,000-600,000, fascinates the observer with a drawing power characterized by a sensitive and yet very powerful expression.

ZERO surroundings also were home of Enrico Castellani, whose creation "Superficie bianca" from 1978 (estimate: € 300,000-400,000) comes from his key work group which largely made for his international renown, as well as for ever new record prices on the auction market.

While Willi Baumeister's "Phantom in Rot" will enter the race with an estimate of € 250,000-350,000, other important works in this section are Victor Vasarely's "Korna" (estimate: € 100,000-150,000) and a collage by Afro Basaldella (€ 80,000-120,000), as well as works by, among others, Günther Förg, Rupprecht Geiger, Gotthard Graubner, Asger Jorn, Imi Knoebel, Marino Marini, Henry Moore, Eduardo Paolozzi, Serge Poliakoff, Kazuo Shiraga, Hiroshi Sugimoto and Fritz Winter.

David LaChapelle
Intervention (from the series: Jesus is my Homeboy)
Color photograph, 2003, 157 x 241 cm (61.8 x 94.8 in
Estimate: € 30.000-40.000
In the section of Contemporary Art it is Keith Tyson's Diptychon "Geno/ Pheno Painting: Two Curves" (estimate: € 50,000-70,000) from 2004 that is particularly fascinating, as it is about a mathematical formula and the representation of its physical manifestation. Both must be regarded as equal expressions of one and the same curve formation, each illustrating the fundamental nature of the other. Works by the London artist are on display at, among others, the MoMA and the Whitney Museum in New York, as well as the LACMA in Los Angeles

The American David LaChapelle is guaranteed to make for enthusiasm in the section of photography, as his visionary and imaginary oeuvre shows the influence of Surrealism, Pop Art and the much-referenced "Postmodernism". An example thereof is "Intervention" from the six part series "Jesus is my Homeboy". Inspired by the words on a T-shirt, the artist began to create iconic scenes from the life of Christ in a modern interpretation in 2003. The estimate for this work is at € 30,000-40,000.

Next to a "Gum painting" by Dan Colen (€ 30,000-40,000), other top lots by, among others, Martin Eder, Eberhard Havekost, Nathan Hylden, Roman Kochanski, Joseph Kosuth, Stefan Kürten, Alex Mirutziu, Dasha Shishkin, Alexander Ernst Voigt and Cornelius Völker will be called up.

Previews in Germany and Switzerland:

Since it was founded in 1954, Ketterer Kunst has been on the forefront of auction houses dealing in Fine Art and Rare Books, with its headquarters in Munich, and a branch in Hamburg. Representatives' offices in Berlin, Heidelberg, Dusseldorf, Italy and the US have contributed substantially to the company's success. In addition, exhibitions, special thematic and charity auctions as well as monthly online auctions at www.ketterer-internet-auction.com are regular events at Ketterer Kunst. Robert Ketterer is owner and CEO of Ketterer Kunst.