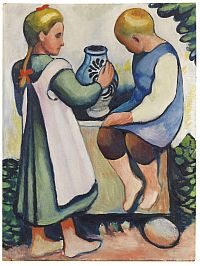 This work is one of two versions August Macke made. "Kinder am Brunnen I" used to be part of the acclaimed collection of Bernhard Köhler, who was an early patron of August Macke and Franz Marc. This version, however, was de-stroyed in an air raid on Berlin in World War II.

1910, the year of origin of the work, was of crucial importance for August Macke's oeuvre, as he had just found the peace necessary to unfold his artist personality in the calm of the Tegernsee region. Works from these days are characterized by a tremendous clarity, as this oil painting shows in a most wonderful way. What else is particularly charming is the compelling arrangement of the composition. The girl in left with both feet on the ground holds the jug with a firm hand, while the boy sitting rim of the well in right seems to rest his eyes on the water's surface. Macke captures the characters in their surrounding almost like in a still life. This way the contemplative basic concept that the work emanates remains undisturbed. 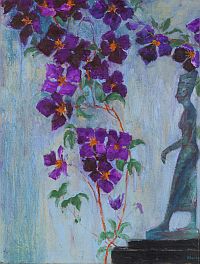 The colors' radiant powers are at the core of Hermann Max Pechstein's oil painting "Rote Häuser". The small-size work from 1932 has been estimated with € 200,000-300,000 and is offered on the art market for the first time. The coloring of "Wintermorgen" (estimate: € 80,000-100,000), on the contrary, is rather modest leaning towards more objectiveness.

A balanced coloring is also a characteristic trait of Gabriele Münter's oil painting "Murnau, Hauptstrasse am Sonntag im Mai" from 1924. This composition's unusual dynamic is accounted for by the bold perspective, with an estimate of € 140,000-180,000 it is guaranteed to make for some excitement in the salesroom.

Works from the departments of Post War and Contemporary Art, also called up in the auctions from 8-10 December in Munich, are presented in a separate press release.

Previews in Germany and Switzerland:


Since it was founded in 1954, Ketterer Kunst has been on the forefront of auction houses dealing in Fine Art and Rare Books, with its headquarters in Munich, and a branch in Hamburg. Representatives' offices in Berlin, Heidelberg, Dusseldorf, Italy and the US have contributed substantially to the company's success. In addition, exhibitions, special thematic and charity auctions as well as monthly online auctions at www.ketterer-internet-auction.com are regular events at Ketterer Kunst. Robert Ketterer is owner and CEO of Ketterer Kunst.