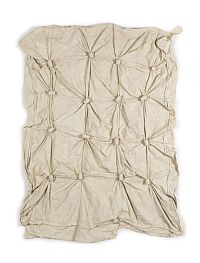 The focus of the 37 works in the exhibition is on a characterization of Herbert Zangs, the art scene's "enfant terrible", as a pioneer of experimental post-war art, as innovator and unrecognized genius. Whether ZERO or art from Beuys to Manzoni - Zangs had anticipated many art trends with an amazing preciseness. In fact, he was and still is a case for adepts.

This is little surprising, because Herbert Zangs, born in Krefeld, Germany in 1924, served as a pilot in World War II for four years and attended the Düsseldorf Art Academy for another four years after the war. He was known as a passionately blustering character, excessive, egocentric and absolutely uncompromising.

Zangs often worked like in a state of ecstasy, however, whenever he should have been present in person in order to obtain commissions, he often just disappeared. To him freedom and independence always came first. It probably is this absolutely uncompromising attitude, as well as the fact that the impressive primal power reveals a highly sensitive character, a calm, melancholic and almost poetic artist, that makes his art so special. His famous "Verweißungen" (Whitenings), his relief paintings and the folded and knitted objects show an artist characterized by an elemental force and a subtle, hidden sensitivity at the same time.

"I am very happy about the generous loans that enabled us to compile this impressive exhibition of high-quality works from Herbert Zangs' best period of creation and to illustrate the pioneering role of the wayward exceptional artist“, says Robert Ketterer, owner and managing director of Ketterer Kunst.

On occasion of the exhibition "Herbert Zangs - Frühe Arbeiten" (Herbert Zangs - Early Works) Prof. Dr. Erich Franz, honorary professor at the Art Academy in Münster, will be delivering the opening speech on 2 September in Düsseldorf and on 7 October in Berlin. The exhibition catalog with the title "Bild als Energiezustand" (Image as Energy State) also offers a knowledgeable examination of Herbert Zangs' early period of creation. 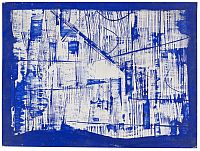 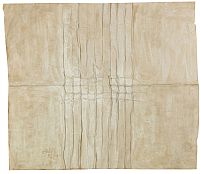 Ohne Titel (Faltung), 1953
Mixed media. Dispersion paint and folded packing paper
116 x 135 cm (45.6 x 53.1in)
Since it was founded in 1954, Ketterer Kunst has become established as one of Germany's biggest auction houses dealing in Fine Art and Rare Books, with its headquarters in Munich and a branch in Hamburg. Representative offices in Berlin, Heidelberg, Dusseldorf, as well as in Modena (Italy) and Los Angeles (USA) have substantially contributed to the company's success. In addition, exhibitions, special thematic and charity auctions, as well as monthly online auctions at www.ketterer-internet-auction.com are regular events at Ketterer Kunst. Robert Ketterer is owner and CEO of Ketterer Kunst.