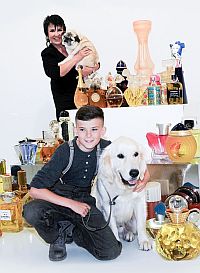 Uschi Ackermann
with her pug Sir Henry and Ben Neumann with his VITA assistance dog Quest in the middle of a selection of some of the perfume flasks to be auctioned
Foto: Terence Tremper
Munich, 7 September 2016 (kk)- It has to be the biggest private collection of large factices of renowned perfume classics in the world that the PR lady Uschi Ackermann, mistress of Germany's most famous pug Sir Henry, has compiled over the years. The widow of Gerd Käfer, delicatessen king and organizer of legendary parties, is now going to put the noble flasks into the service of a good cause.

The auction house Ketterer Kunst will offer Uschi Ackermann's complete collection of around 300 large-size perfume flasks in Munich on 7 December 2016. Proceeds will go to "VITA", an organization that trains assistance dogs for disabled people. "I decided in favor of VITA assistance dogs, because I have found so much inspiration from Ben Neumann, an eleven-year old blind boy and his VITA-trained dog Quest. Sir Henry and I spent a lot of time with them and it is so astounding to see how much is possible with a good animal friend at your side", says Uschi Ackermann, who has made countless perfume promotions during her 30 years as PR consultant for international cosmetics companies.

Robert Ketterer, owner and CEO of the renowned German auction house, which sold the furnishings and equipment of the famous restaurant 'Käfer-Schänke' in 2005, was enthusiastic on the spot: "Assistance dogs make the lives of so many people easier, so I am very happy to contribute with this auction". He continues: "The sale of the well-kept flacons will be surely met with a lot interest. I am convinced that the proceeds will help immensely, as the sale is a unique opportunity for both collectors and perfume lovers. Especially as many of the flasks are no longer available", says the auctioneer.

All flacons can be viewed at Ketterer Kunst. Ben Neumann will open the auction with a short speech. On the day of the auction the bakery Grimminger will provide guests with Christmas cookies and stollen, while Delicatessen Käfer will donate Christmas punch and sparkling wine. The auction catalog with images of all bottles - the cover design comes from the former Montessori student Terence Tremper - will be available at Ketterer Kunst as of mid November.
Preview


Since it was founded in 1954, Ketterer Kunst has become established as one of Germany's biggest auction houses dealing in Fine Art and Rare Books, with its headquarters in Munich and a branch in Hamburg. Representative offices in Berlin, Heidelberg, Dusseldorf, as well as in Modena (Italy), the Benelux Union, France, Switzerland and in Los Angeles (USA) have substantially contributed to the company's success. In addition, exhibitions, special thematic and charity auctions, as well as monthly online auctions at www.ketterer-internet-auction.com are regular events at Ketterer Kunst. Robert Ketterer is owner and CEO of Ketterer Kunst.