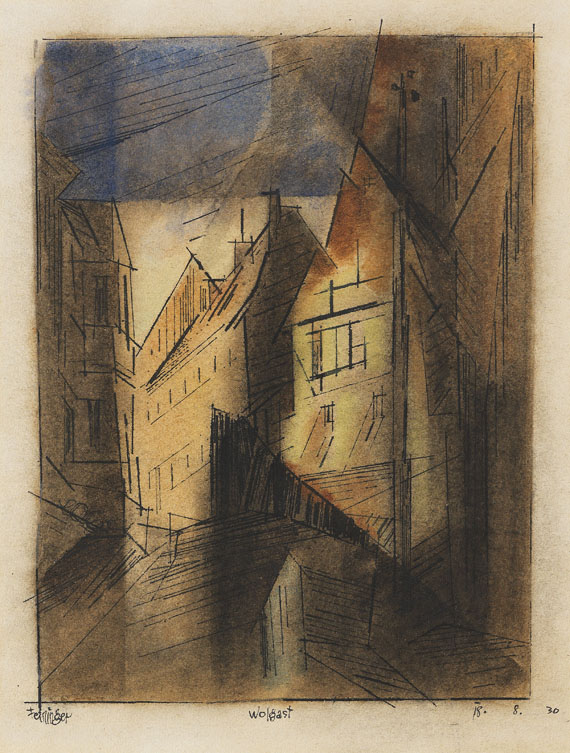 Achim Moeller has confirmed this work's authenticity. The work is registered in the archive of the Lyonel Feininger Project LLC under the number 1266-04-23-14.

Lyonel Feininger was born on 17 July 1871 as the son of a concert violinist of German origin and a singer and pianist. He followed his parents to Europe in 1887, where he first attended the drawing and painting class at the Gewerbeschule in Hamburg and later studied at the Königliche Kunst-Akademie in Berlin from 1888 to 1892. Then followed one year in Paris where he attended the private art school of the Italian sculptor Filippo Colarossi. Feininger returned to Berlin in 1893, where he earned a living mainly as an illustrator until 1906. He spent the following two years in Paris where he met the 'Café du Dôme'-circle of German Matisse pupils as well as Robert Delaunay. He became a member of the 'Berliner Sezession' in 1909, exhibiting at their show for the first time one year later. The artist travelled to Paris in 1911 for his exhibition at the 'Salon des Independants'. Here he had his first encounter with Cubism. His acquaintance with Alfred Kubin and the 'Brücke' painters Karl Schmidt-Rottluff and Erich Heckel opened up new perspectives for his own work in 1912. He began making his first architectural compositions with the typical Cubist fragmentation. In 1913 Franz Mark invited Feininger to participate in the 'Erster Deutscher Herbstsalon' at Herwarth Walden's 'Sturm'-Galerie in Berlin, which also organised Feininger's first one-man exhibition in 1917. Walter Gropius called him to the 'Bauhaus' in Weimar in 1919, where he taught graphic art and painting until 1926. Together with Wassily Kandinsky, Paul Klee and Alexej von Jawlensky Feininger founded the artist group 'Die Blauen Vier' in 1924.

A first comprehensive retrospective exhibition took place in 1931 at the Kronprinzen-Palais in Berlin, where the artist moved in 1933. Feininger emigrated to New York in 1937. In the same year the National Socialists confiscated more than 400 of his works. Feininger's artistic breakthrough in the US only came in 1944 with a retrospective exhibition at the Museum of Modern Art in New York. In 1945 Feininger ran a summer course at the Black Mountain College in North Carolina, where he met Gropius and Einstein. His teaching, his writing and his later watercolors were an important source for the development of Abstract Expressionism in America. 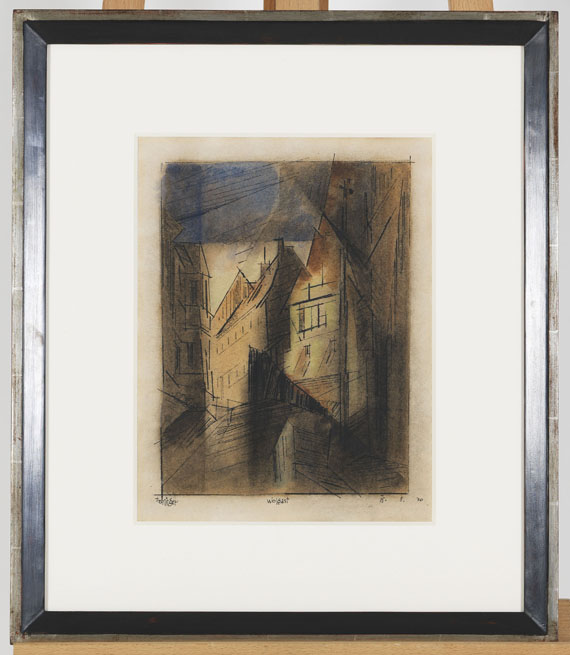