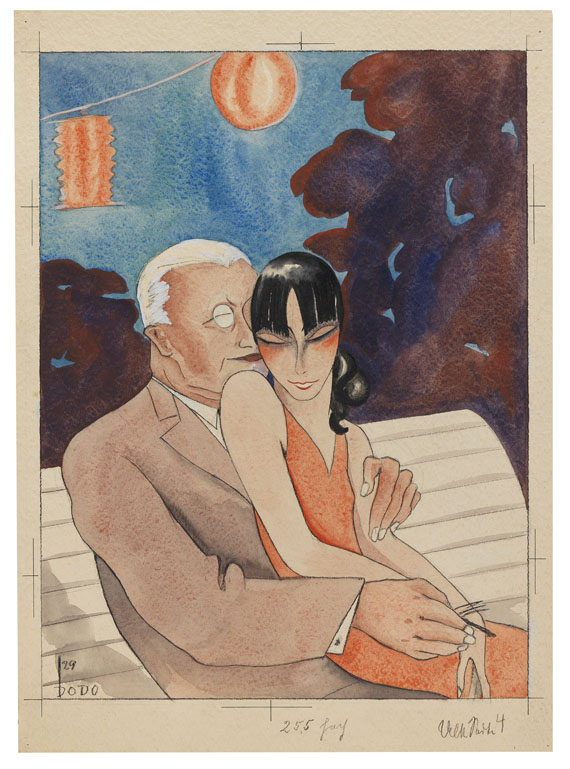 Dodo, actually D ö rte Clara Wolff, was born second daughter of a Jewish upper class family in Berlin in 1907. From an early point on she decided to pursue an artistic career. Encouraged by her family, she began to study at the renowned private arts and crafts school Reimann in Sch ö neberg in autumn of 1923. Dodo took courses in nature studies, anatomy, portrait drawing, decorative painting as well as stage and costume design. Among her teachers were famous artists such as Georg Tappert and Erna Schmidt-Caroll. After she had successfully completed her studies in September 1926 Dodo began working as a freelance graphic designer. From the beginning on she received a large number of commissions, among others, she made illustrations for the fashion magazine "Vogue" and designed costumes for the show "Es liegt in der Luft", which premiered in May 1928 with Margo Lion and Marlene Dietrich as starring artists. At the peak of Dodo's artistic career her illustrations were featured in the satirical magazine "ULK". At that time her art was on par with the works by Jeanne Mammen, they were on the magazine's cover or as full-page illustrations inside.

Her own surroundings, the “ Roaring Twenties “ in the metropolis Berlin, are a permanent source of inspiration for Dodo. Next to her works' striking statements, it is especially the artistic quality of her illustrations that make her so special. They are particularly captivating for her elegant and meticulous line management and their coloring. At first sight the cuddling couple on a park bench under lampions in a warm summer's night seems to be an intimate scene. However, a closer look reveals more: The scene shows an unequal partnership, the man's big hands grab the shy boyish girl. Additionally, the whole scene is bathed in a cool blue. The fact that the man with the monocle is a lot older than the girl is a clear parallel to the artist's life.

It was in 1929 that Dodo married the 25-years older lawyer Dr. Hans B ü rgner, with whom she had two children. However, her marriage was soon in crisis and she began an affair with the psychoanalyst Gerhard Adler – the menage á trois soon failed and she divorced from B ü rgner and married Adler. Because of her Jewish origin Dodo emigrated to London in 1936 and continued to work on illustrations. However, when her marriage with Gerhard Adler failed she intensified contact with Hans B ü rgner anew and remarried him in 1945 after the war. As of this time Dodo was intensively occupied with landscape painting, nudes and still lifes, but her oeuvre also included tapestries. Remote from public attention for decades, Dodo's fascinating art and personality were honored in exhibitions in Berlin and London in 2012. [DB].