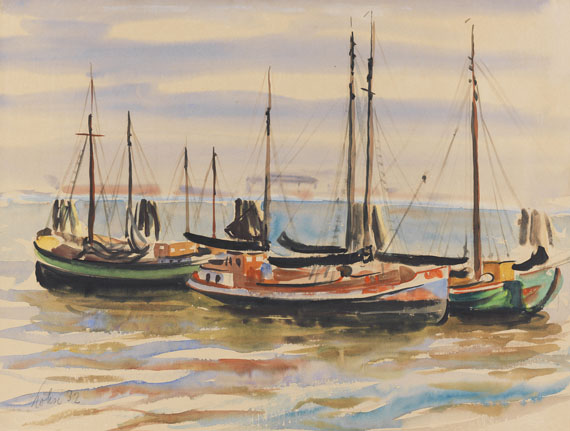 Carl Lohse, who was initially under the patronage of Alfred Lichtwark in Hamburg, studied from 1912 to 1913 at the Academy in Weimar under Albin Egger-Lienz and Fritz Mackensen. There he became a friend of Otto Pankok, whom he visited in the village of Dötlingen near Oldenburg for a longer time in 1914. In galleries in the Netherlands he became acquainted with the works by Vincent van Gogh. In 1919 and 1921 Lohse showed his works in exhibitions in Dresden. Despite enthusiastic critics, economic success failed to appear and Lohse largely abandoned his artistic activities. His second period of creation began only when he moved to Bischofswerda in 1929. Lohse reflected the landscape in the Lausitz and the working people in his surroundings in mannifold motifs. He renders them in well-balanced compositions and with his very characteristic luminance. Today works by Carl Lohse are in possession of renowned museums such as the 'Pinakothek der Moderne' in Munich and the Nationalgalerie in Berlin. [CB].

More Information
+
Sell
Get a free appraisal for a similar object!
+
Register for
Carl Lohse
+
Buying from A-Z
+
Contact a specialist
Share