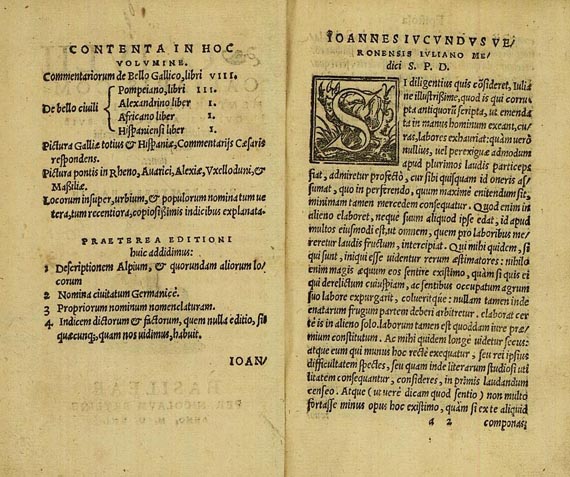 Index Aurel. 128.759. - VD 16, C 42. - BM STC p. 172. - Adams C 46. - Not in Schweiger. - Based on the aldine executed by Johannes Jucundus in 1513. The woodcuts had already been used in Brylinger's edition from 1544. The maps show Gaul and Spaien, the fine woodcuts show fortifications and bridges. - On the Basel printer Nicolaus Bryling cf. Heckethorn p. 178: "He was the first printer who issued editions of Latin authors with all objectionable passages omitted, editions which since then have been called editiones expurgatae ." - With waterstains, 4 pp. with nasty scribblings in ink, with annotations by an old hand in places, few initials partly filled with ink (offsetting), impressions of clasps in side margins of first third. Binding slightly stained, spine ends slightly torn.