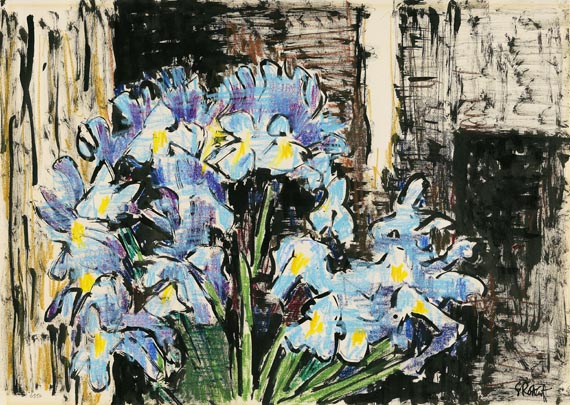 Accompanied by a certificate of authenticity by Galerie Rosenbach, Hanover, dated 15 June 1971 (in copy).

Karl Schmidt-Rottluff employed color chalks in his works from an early point on – at first in self-made postcards that he sent to friends and other painters, later they became an important element in his compositions. Almost always combined with an India ink drawing, the color chalks at times develop a lucent life of their own, which adds a fresh expression to the composition, an effect that can normally only be attained by strong watercolors. Schmidt-Rottluff‘s later flower still lives have the same vital expression, of which our sheet, created by the artist at the age of over eighty, is an impressive example. Unlike it is the case with some of his artist colleagues from the ‘Brücke‘ and Expressionism, Karl Schmidt-Rottluff’s late work still shows the same artistic furor as his early works. [KD].