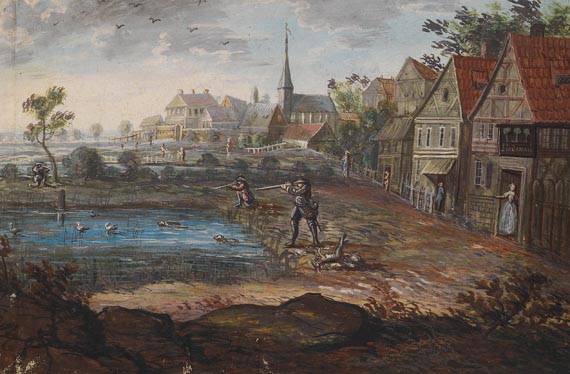 Nice Album Amicorum of Peter Robert van or von Wylich (also Willich) from Berlin. With splendid drawings. The numerous places where the entries were mostly made in French indicate that Van Wylich was travelling on a Grand Tour in 1750-1751, among others, to Rome, Paris, Strasbourg, Lyon, Amsterdam and London. The fine and lavishly executed drawings (among them an emblematic title drawing by the owner) show a scene of a card game, a hunting scene, pastoral scenes, sailing boats in a storm, market square with an Obelisk (sketch in pencil), children playing et al. - Boards slightly bowed, all in all well-preserved.

More Information
+
Sell
Get a free appraisal for a similar object!
+
Register for
Album amicorum
+
Buying from A-Z
+
Contact a specialist
Share