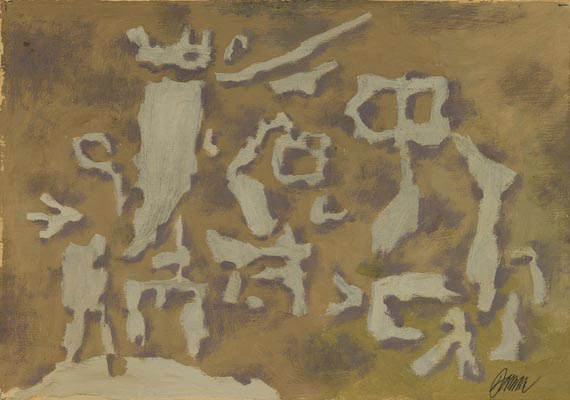 The world of archaic forms that Baumeister mentioned in 'Formbildung', can also be found in other works from that period. By means of applying layers of paint over one another, Baumeister evokes optical quasi-reliefs, their pastose compression adds physical impression to the forms. They are so to speak worked out from the primal ground by means of overdrawings, they are in an original state of formation, awaiting their completion at a distant time that remains undefined. The slight shading adds a kind of physical effect that allows them to step out from the ground. In their rudimentary stature forms become symbols for sunk cultures, keeping their secrets once and forever. With this world of forms Willi Baumeister created a very own iconography within his oeuvre, its symbolic power goes far beyond everything that Modernism brought forth in those days. [KD].