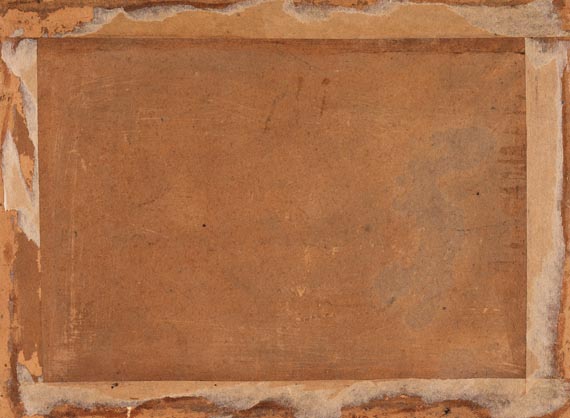 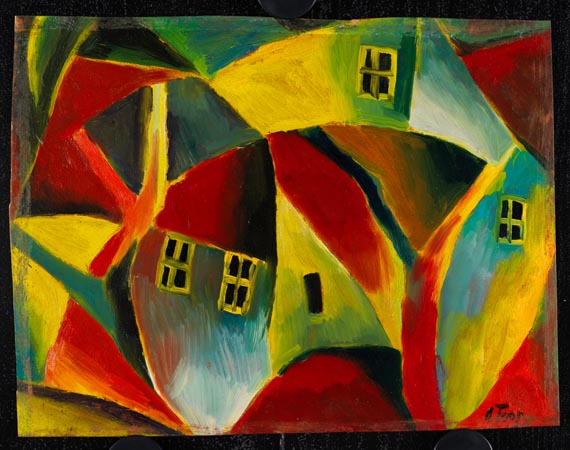 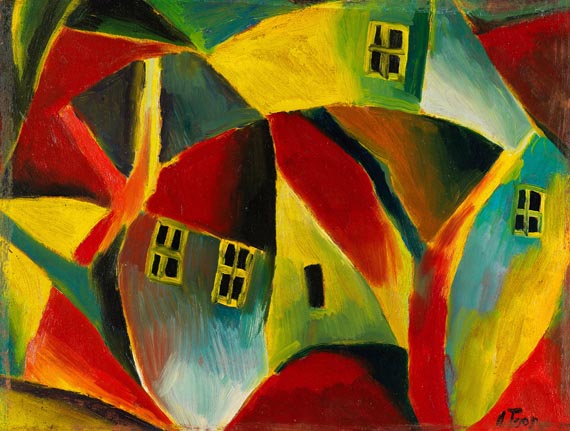 This work is accompanied by an expertise from Dr. Rainer Enders, Frankfurt (Oder) dated 22 March. The work will be included into the forthcoming new edition of the catalog raisonné under the number 18.Oe.35. According to Enders it is likely that this is work 18.Oe.13, which is considered to be lost.

Arnold Topp was born in Soest, Westphalia, in 1887. By 1904 he was already friends with the Soest artists Wilhelm Morgner and Eberhard Viegener. Topp first attended the Soest Teachers’ Seminary and on graduation worked as a village schoolmaster. In 1910 he changed to the Royal Art School in Düsseldorf, where he studied under Lothar von Kunowski. Topp then worked as a drawing master in Brandenburg on the Havel from 1913. From there the artist cultivated the ties he had previously forged with the Berlin gallery “Der Sturm”. He visited Berlin regularly and made friends with artists such as Bruno Taut and Georg Muche. The painter married in 1914, his first son was born a year later Topp’s first show was held at “Der Sturm” in December 1915. That same year Topp was conscripted for military service, he was wounded in combat near Verdun. After stays in several military hospitals Topp returned to Brandenburg. In 1918 Topp was a founder-member of the Work Council for Art.

The long list with exhibitions at the gallery 'Der Sturm' is proof enough for how much Herwarth Walden seems to have valued this small painting. The breakdown of a world that is petty bourgeoisie but yet stable is depicted in Topp's city scenes. Just like his contemporaries, he sees the social upheavals of his days as a kind of apocalypse breaking in on a consolidated regularity. The houses seem to be abandoned, without any kind of social life, just the dead windows inquiringly gaze into emptiness. It is a changing world, that Topp made his subject. He visualizes it in his very own use of forms and colors, their reflection expresses a sense of time that was shaped by latent uncertainty.

Topps artistic creation comprised a wide range of techniques. Until 1929, Arnold Topp showed his works at numerous exhibitions in Germany, the US, the Soviet Union, Japan and France. As of 1927 he was lecturer in Brandenburg. As a reaction Law for the Restoration of the Professional Civil Service, he joined the National Socialist’s teachers League, however, his art was still defamed as degenerate. At least five of his works were included in the notorious exhibition of “Degenerate Art”. In 1940 he was placed in Meseritz in Western Prussia and in 1945 he was conscripted despite his age into the last-ditch effort made by the National Socialist regime before being transferred to the Wehrmacht. He was reported missing in action from that time on. Due to the Red Army’s progression numerous works had to be left behind. In April 1961, Arnold Topp was declared dead by the Soest District Court. [KD].