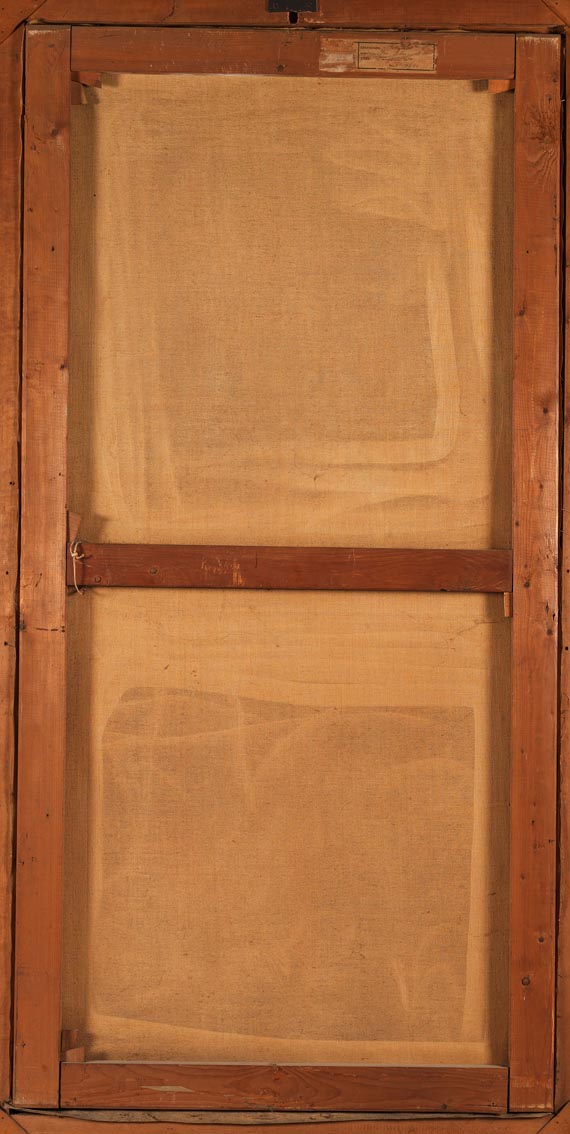 We are grateul to Mr Franz Josel Hamm, Limburg/Lahn, for his expert advice.

Josef Eberz was born in Limburg/Lahn on 3 June 1880, but the family soon moved to Frankfurt/Main, where Eberz completed school in 1901. His father, a post office clerk, asked for a transfer to Munich, so his sons Josef and Ottfried would have the opportunity to study. From 1901 to 1903 Josef studied at the Munich Art Academy with Hugo von Habermann and Franz von Stuck, in 1903 and 1904 he spent some time in Karlsruhe and Düsseldorf. In 1905 he became the student of Christian Landenberger in Stuttgart, however, Josef Eberz spent his most relevant time with Adolf Hölzel at the Stuttgart Academy from 1907 to 1912. This was also where he met the painter Gertrud Alber, who he married in Wiesbaden in 1917. The artist settled in Munich for good in 1918. A year later Josef Eberz participated in the exhibition of the "Novembergruppe" in Berlin. He joined the "November Group" in 1920, and also took part in their exhibitions in 1924 and 1929. Together with M. Beckmann, K. Edschmid, L. Meidner and W. Michel, the artist counted among the first members of the Darmstadt Secession. Additionally, he showed works in the first exhibition of the artists' association "Das Junge Rheinland" (The Young Rhineland) in Düsseldorf. The Wiesbaden collector Heinrich became his patron.

Our particularly charming depiction shows the Viennese dancer Beatrice Mariagraete, who had already been portrayed by the Stockholm painter Einar Jolin in the painting "Primavera Mariagraete" in 1916. This work shows the dancer in a harlequin costume, with her eyes down she seems introverted. The glazed application of the paint and the special make of the canvas emphasize the paintings striking effect and increase the impression of an esthetic and volatile person that seems to be levitating. Josef Eberz went on a study journey to Italy in the 1920s, as a consequence he intensively turned to murals. Just as it was the case with them, the artist also employed the charming effect of the contrast between an emphasized line management and a soft coloring in this work.

Josef Eberz was also active as book illustrator, for instance for Eichendorff's "Ahnung und Gegenwart" in 1920, (33 etchings) as well as etched illustrations for poems by Charles Baudelaire in 1922. Besides landscapes and portraits, J.Eberz, as a believing Catholic, also made monumental religious paintings, for instance, the "Herz-Jesu-Bild" in 1913 in a church in Ehingen, in 1914 the 14 Stations of the Cross for the Marienkirche (Church of Our Lady) in Kaiserslautern and in 1931 the 'Marienfenster', a glass painting in the 'Frauenkirche' in Munich. In 1928 he was appointed professor, however, almost all of his works in German museums were confiscated in 1933. Impoverished, J.Eberz died of cardiac insufficiency in Munich on 27 August 1942. [DB].

More Information
+
Sell
Get a free appraisal for a similar object!
+
Register for
Josef Eberz
+
Buying from A-Z
+
Contact a specialist
Share