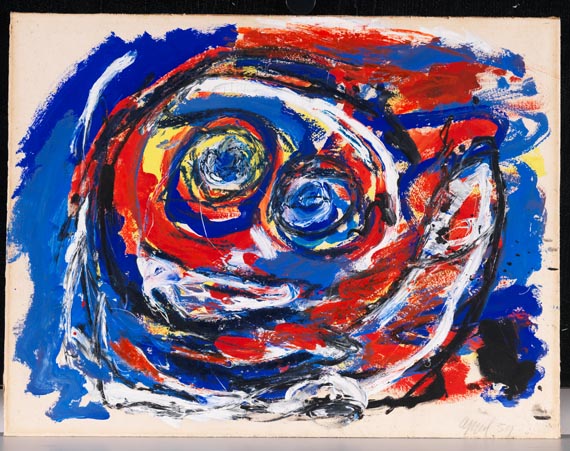 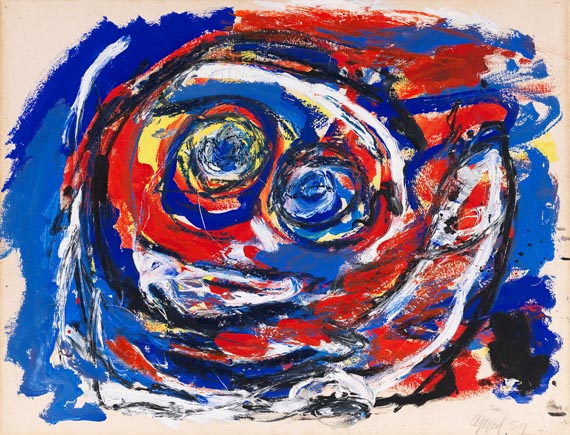 This work's authenticity has kindly been confirme by Mr Jan Nieuwenhuizen, Antwerps.

From 1942 to 1944 Appel studied at the Rijksakademie in Amsterdam, where he met Corneille. Together with Constant and Corneille, he founded the 'Groupe Experimental Hollandais' in 1948. In the same year Dotremont, Noiret, Jorn, Constant, Corneille and Appel brought the artist movement COBRA into being. Karel Appel received his first remittance work for the cafeteria of the Amsterdam town hall, a fresco called "Questioning Children " (1949/50), which triggered controversial reactions. The artist left Amsterdam in 1950 to go to Paris where he joined the avant-gardes movement together with Dubuffet and Fautrier.

Under the influence of the naive-grotesque "Art brut" of Jean Dubuffet, Karel Appel’s specific style began to become evident from an early point on. A style that was characterized by a Primitivist figuration, pastose application of the paint and lucent colors. Around 1958 the artist took on a more informal use of paint, so that faces and figures disappear behind the traces of boisterous artistic gestures. This way he effectively expressed spontaneity, a trait he thought of as decisive for his art.

In 1958 he painted the murals for the Dutch pavilion at the World Exhibition in Brussels and the UNESCO building in Paris. During the exhibition 'Vita lita nell' arte' Appel decorated one room with a cloth collage in the Centro Internazionale delle Arti e del Costume in the Palazzo Grassi in Venice. In 1964 Appel bought Castle Molesmes near Auxerre, where he produced large polychrome reliefs and freestanding sculptures of wood and polyester. In 1984 Appel was awarded the 'Grand Prix du Salon' at the XXIX. Salon de Montrouge in Paris. In 1991 he worked with Allen Ginsberg and Gregory Corso on the “Poetry-Painting Series”. In 1994/95 Appel concentrated on stage design for the Dutch opera.