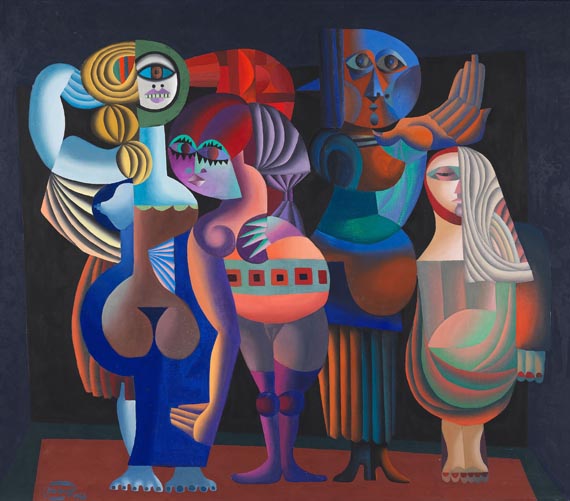 Johann Georg Müller was born the son of an industrial architect in Ludwigshafen in 1913. He began to train in drawing while he was still in school; at first at his fathers desk, where he learned technical drawing and later in evening courses at the Mannheim free academy. After having finished school Johann Georg Müller did an apprenticeship to be a carpenter, later he began to study civil engineering. He discontinued his studies after a short while and continues to take courses with Albert Henselmann at he free academy. Out of interest he examines the works of Wilhelm Leibl and Hans Holbein in the Munich Pinakothek, later he said that these were decisive influences for his artistic development. As of 1937 he worked in Munich as a freelance artist, however, an exhibition ban was imposed on him in 1938. In 1950 he goes to Koblenz for a year on a scholarship. A short time after the war Müller focused on graphic art, but began to make more paintings after he had moved into a new studio. Johann Georg Müller went onto a journey to Crete for several months in 1960, a trip that gave new impulses to his artistic creation. The Mediterranean colors and lights inspired him to make his plant paintings, which, next to the machine paintings, would become so characteristic of Johann Georg Müller’s work. Müller developed his style based on the based, its depiction is affected by the decomposition by a design draftsman and a woodcutter. However, a certain expressiveness flows into the clear stylistic features and the partly architectural composition is emphasized by the contrasting and strongly shaded colors.

Besides pictures of pants and machines, the human figure is also one of the subjects of Joahnn Georg Müller’s œuvre. It can be as a single figure or in groups of figures standing next to one another or intertwined into each other. The light and lucent colors are in the foreground and make for the bodies’ three-dimensional arrangement, which strikingly contrast the dark and undefined background. The artist was inspired to this motif during a visit to his children in London.

Numerous works of this type were made in the 1970s. He conveys the biomorphic forms of the plant pictures to all other subjects. This was also the time when Müller explored new artistic means, he began to make black and white photographs and n arrow-gauge film. Up until the end Johann Georg Müller worked eight hours a day in his studio. The artist died on 20 June 1986 in Koblenz. [SM].

More Information
+
Sell
Get a free appraisal for a similar object!
+
Register for
Johann Georg Müller
+
Buying from A-Z
+
Contact a specialist
Share