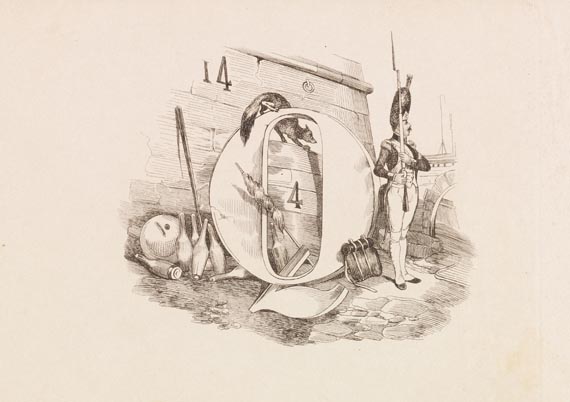 Not in Gumuchian. - Sophisticated ABC book with 24 letters and twelve numbers, presented in an amusing manner in sceneries with people, animals or things that begin on the respective letter. - The work had already been published by V. Adam without the text in 1834, just with the lithographs (10 plates, each with 4 illustrations), after which Boye had made his engravings. - The Stralsund native Frederic Boye, who had spent many years in Germany while serving in the military, wanted to live up to his roots in the German culture and language, which found particular expression in the making of his ABC books (cf. Wilke, ABC-Bücher in Schweden, p. 204). - Lacking pp. 7/8 and 91/92. - Text evenly browned, binding loosened and title detached (marginal blemishes), plates slightl