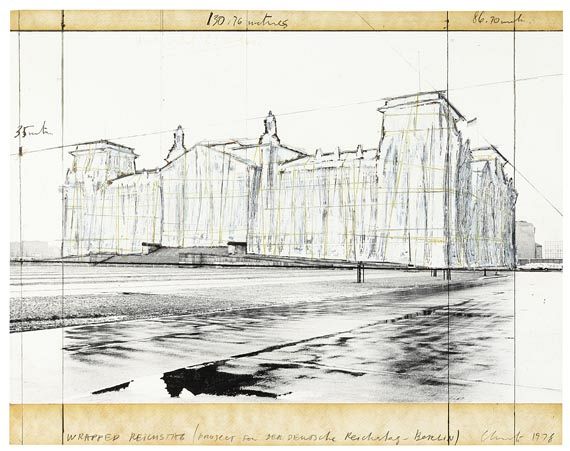 Since 1971 Christo and Jeanne-Claude had been trying for a permit to wrap up the Reichstag Building. They set out their vision in collages, drawings and models. Our work dating from 1978 attests to the long phase of work that went into convincing the authorities to grant them permission for what they had in mind. The artists encountered tough, long-drawn-out resistance. Politicians were worried they might make the Reichstag and its members look ridiculous by wrapping it up. Finally Chancellor Helmut Kohl intervened and yielded in 1994 to the artists’ persistent blandishments after a vote in the Bundestag. Following a positive vote, the Reichstag Building was wrapped up for two whole weeks in 1995. The artists themselves bore the costs: 15 million dollars, which were made up from selling the collages and drawings they had produced during the work process. [SM]

More Information
+
Sell
Get a free appraisal for a similar object!
+
Register for
Christo
+
Buying from A-Z
+
Contact a specialist
+
Christo Biography
Share