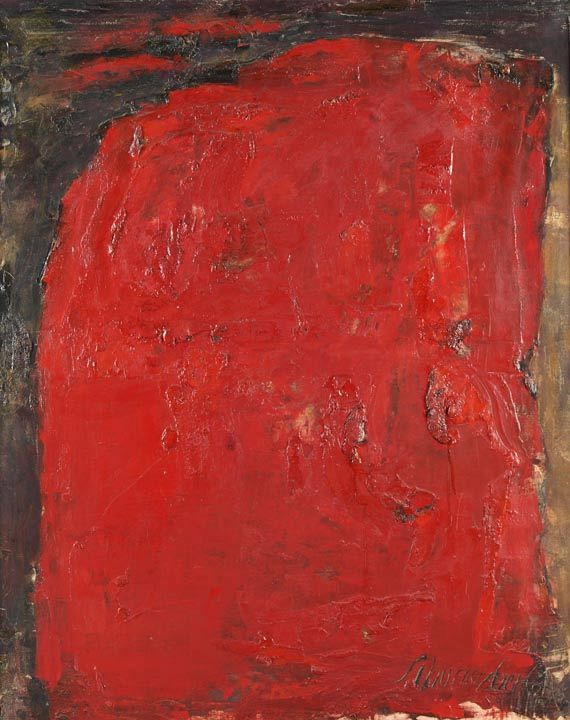 Born in Hagen, Westphalia, in 1912, Emil Schumacher began at the age of twenty to study art at the Dortmund Applied Arts School, which he attended for three years. From 1935 he freelanced as a painter. In 1947 Schumacher and fellow painters founded “junger Westen” [“Young West”], an association for mounting exhibitions. The year 1950 marked a radical shift in Schumacher’s work. He abandoned the object as motif, opting instead for the expressive powers of painting itself. Color increasingly became a pictorial factor in its own right. This biographical and artistic process took place against the background of a period style shaped by the École de Paris, Tachism and American Action Painting. Although abstraction was, on the one hand, a sign of the times, for Schumacher it became a hallmark of his personal signature.
In the early 1960s, a form that would be so characteristic of Schumacher’s work showed up, as it does in the present picture, for instance the color incrustation that thrusts like a rock from below up into the picture. In seeking to define the material quality of the picture surface, Schumacher always remained a painter - apart from the tactile objects he produced at the same time. In his eyes, no material other than paint had the legitimacy to create materiality on the canvas.
Between his participation in the 1964 Kassel documenta III and on into the 1980s, Schumacher continued to produce pictures in extremely large formats, in which a pronounced drive for painterly freedom is apparent. Since the mid-1950s Schumacher had been internationally acclaimed as a leading exponent of Informel. Schumacher’s work received numerous international prizes, of which the Guggenheim Award in New York in 1958 marked only the beginning. In 1998 the Federal German Bundestag honoured him with a commission for a mural in the Berlin Reichstag Building. A year after the grand retrospective in Munich, Emil Schumacher died in San José on 4 October 1999. [JS].