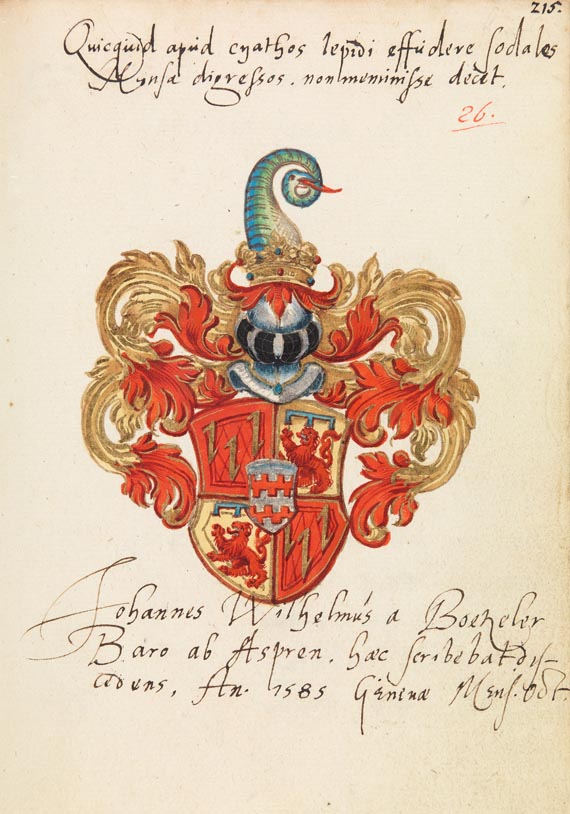 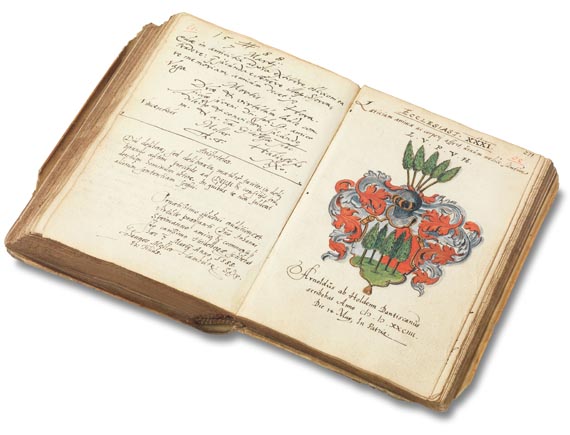 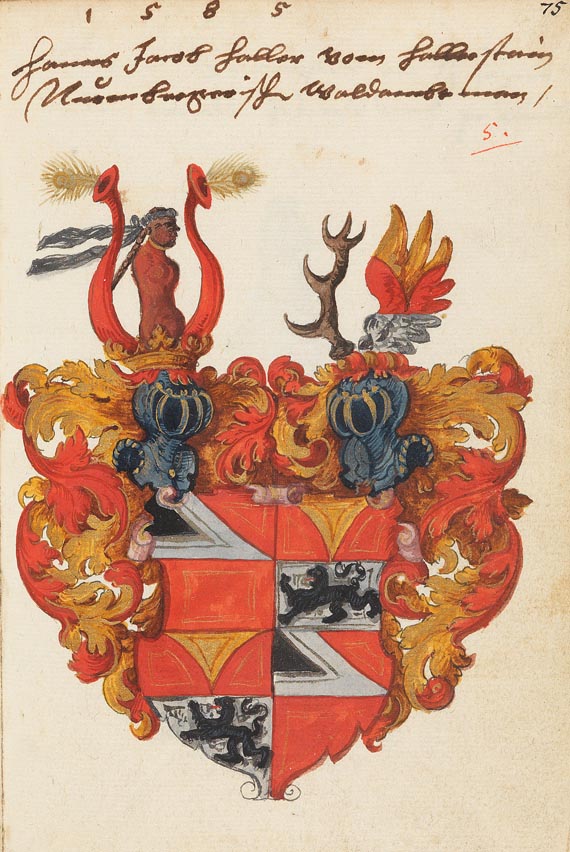 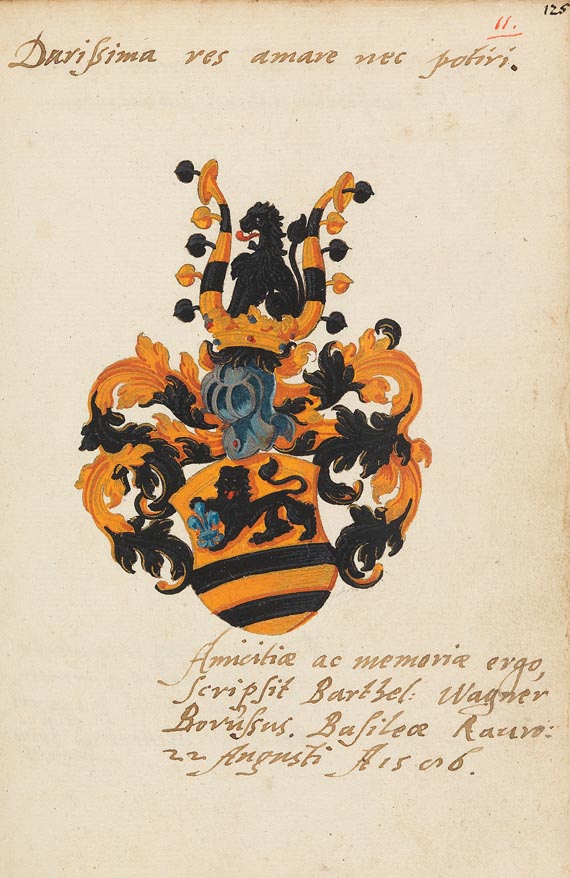 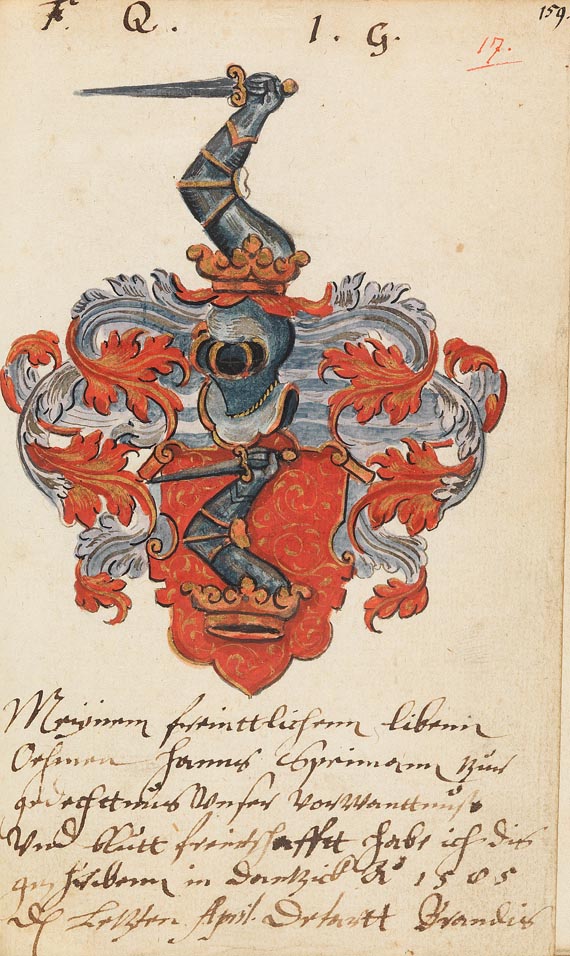 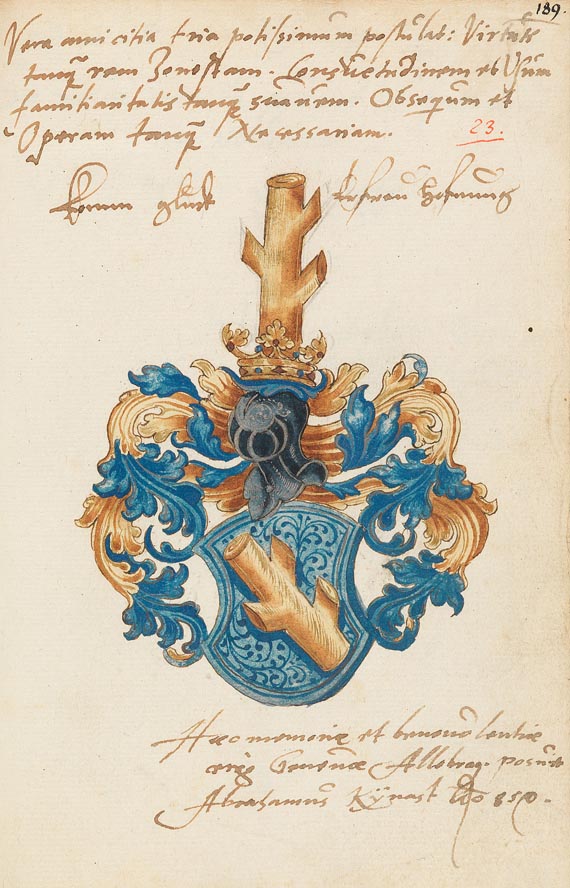 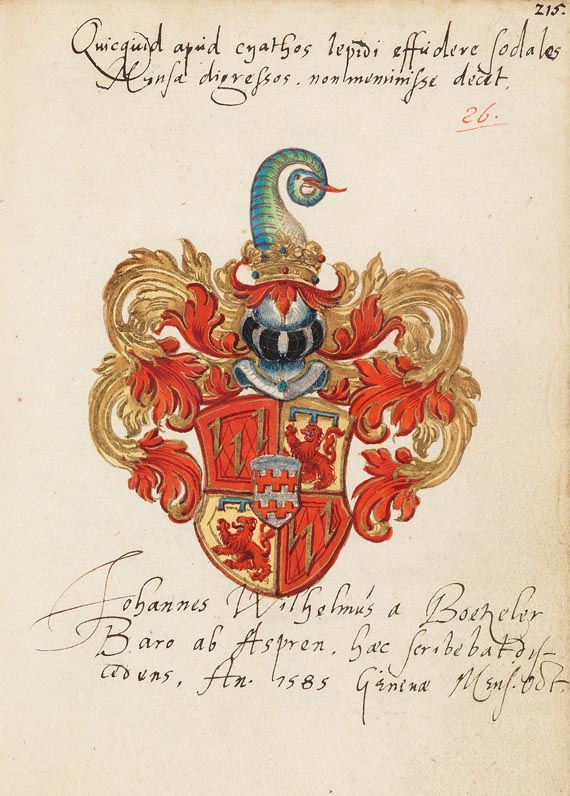 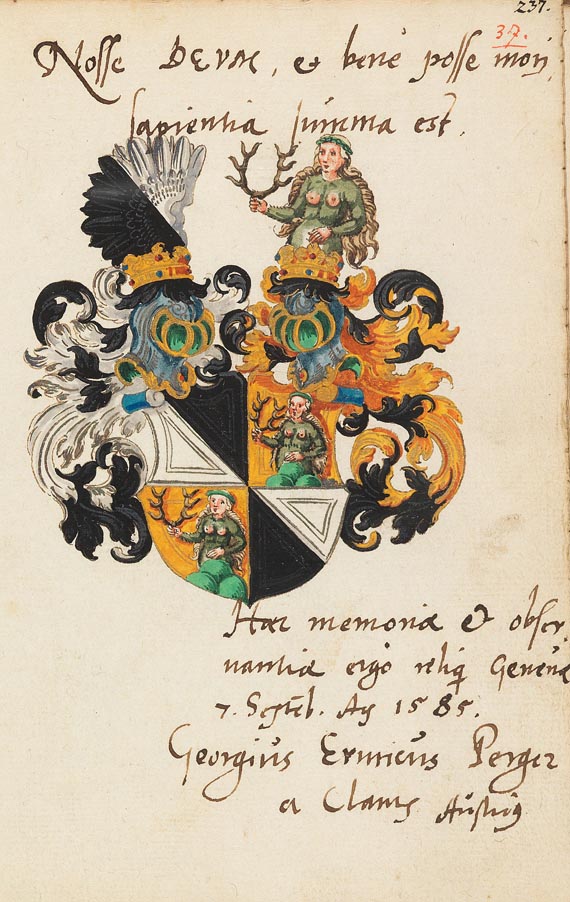 4
Album amicorum
Stammbuch des Johann Speimann. 1585., 1595.
Estimate:
€ 4,000 / $ 3,680
Sold:
€ 7,680 / $ 7,065
(incl. 20% surcharge)
Album amicorum. - Album Amicorum of the Danzig merchant and mayor Johann Speimann (1563-1625). 172 ll. with 87 entries. Geneva, Heidelberg, Basel and Danzig 1585-1588. With 38 armorial watercolours. Contemp. vellum with ornamental gilt tooling, with monogram "I[ohann] S[peimann] D[anzig]" and date "1585" on front board as well as with gilt edges and yapp edges. 8vo. (16,5 : 11 cm).
Outstanding Album Amicorum of the Danzig mayor, merchant, patron and collector Johann Speimann (also: Speymann or Speimann von der Speie), who went on a prolonged journey to Italy after he had completed his studies in Cracow. Besides those places mentioned in this book, he stayed in Königsberg, Wittenberg, Strasbourg, Padua, Pisa and Siena. Back in Danzig, he established trade connections, mostly with Italy that he supplied with grain by ship, as Italy was suffering under bad harvests. Another journey to Venice in 1592 increased his connections even more, as he was ennobled by pope Clement VIII. for his help for the starving Italians. Danzig owes the wealthy merchant numerous monuments, among them the famous Speimann House, which is also called Goldene Haus (Golden House) for its rich gilt decorations. He was councilman since 1603, and from 1612 up until his death in 1625 he was Danzig's mayor (cf.: M. Bogucka, Die Kunstförderung in Danzig - Hans Speiman, seine Sammlung und seine Stiftung. In: Bürgertum und Kunst in der Neuzeit. Published by H. U. Thamer. Cologne 2002. Pp. 115-124).

The splendid decoration with armorial watercolours is in line with the large number of important people, who had written into his book. The entry by the artist Thomas Schweicker from Schwäbisch Hall (1540-1602), is a particularly remarkable piece, as he did not have arms and wrote the entry by means of his feet. Despite this handicap, he was able to make a living as a calligrapher. Even though Schweicker was quite famous in those days, attracting many visitors to Schwäbisch Hall, in order to acquire his works, even though emperor Maximilian II. was among those interested in his art, autographs by his hand or rather his foot are extremely rare (our inquiry has not found proof of a singly item on the auction market). He wrote for Speimann: "Dem Edlen und Vesten Junkherrn Hannsen Speiman zu ehren und wolgefallen hab Ich Thomas Schweicker zu Sch. Hall, diß mit meine(n) füsse(n) geschrib. Den 19ten May A(nn)o 1585 ..." (on Schweicker cf. Thieme/B. and Nagler).

The front pages of the first 9 ll. contain an alphabetical register of entries, autographed by Speimann, partly with Latin quotations on rear, also written by his hand. Pastedowns also signed by Speimann. - Attached is a manuscript index by the former owner baroness Elise Kressig-Warthausen (same format, together with the album amicorum in slipcase). - Corners of binding with traces of worming, gilt tooling faded, else well-preserved.
Outstanding Album Amicorum of the merchant and art collector Johann Speimann, famous mayor of Danzig from 1612 up to his death in 1625, owner of the town's most attractive Renaissance mansion, the so called Golden House. 172 leaves with 87 entries from Genf, Heidelberg, Basle and Danzig in 1585-1588, written during Speiman's educational journey to Italy. Containing 36 magnificent coat of arms in watercolour. With an alphabetical index by Speimann's own hand at the beginning, interspersed with some Latin quotations, his signature on the pastedown. Contemp. vellum with gilt ornaments, Speimann's monogram and date '1585', as well as gauffered gilt edges (corners with damage by mice, gilt tooling faded). Size 16,5 : 11 cm. - Among the entries are many noblemen, merchants and scholars. A rarity are the lines by the armless calligrapher Thomas Schweicker in Schwäbisch Hall (famous in his time and visited even by emperor Maximillian II.) which he has written with his foot. - Attached an manuscript index by the former owner baroness Elise Kressig-Warthausen (bound in same size, together with the Album in a marbled slipcase). Well-preserved.

More Information
+
Sell
Get a free appraisal for a similar object!
+
Register for
Album amicorum
+
Buying from A-Z
+
Contact a specialist
Share