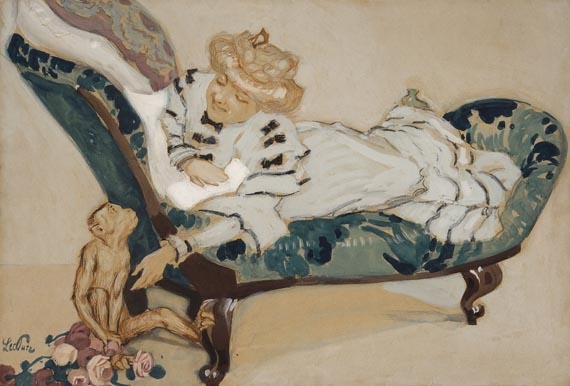 Der Liebesbrief II. 1904.
Gouache, charcoal, opaque white, crayon and pencil.
Putz 293. Signed lower left. On light grey laid paper. 49 : 72,2 cm (19,2 : 28,4 in), the full sheet. Like so many other artists who would attain renown in later years, Leo Putz was represented in Jugend, the Munich illustrated weekly founded by Georg Hirth in 1896. The journal saw itself as opposing 19th-century naturalism. Ornamental curvilinearity and subtly articulated surfaces became the salient characteristics of the period in art to which Jugend involuntarily gave its name. However, Leo Putz’s development as an artist did not entail breaking with a tradition viewed as outmoded. Instead, he built creatively on that tradition. Dreamy, sensuous portrayals of women and young girls are typical of his work in his Jugend days. [NB]
EXPERTISE: The authenticity of this work has kindly been confirmed in written form (e-mail) by Leo Putz, estate Prof. Leo Putz, Gauting
PROVENIENZ: Private collection South Germany.