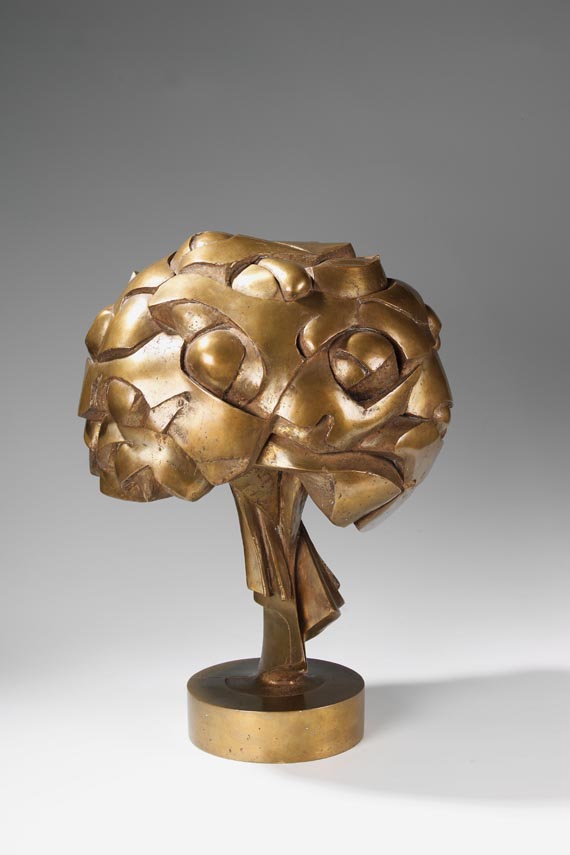 Bouquet II. 1967.
Bronze, polished.
Clarenbach 389. With the artist's monogram. One of 6 copies. 51 : 37 cm (20 : 14,5 in). With the Bouquets Koenig produced in four versions, he was formally close to The Sphere, the most famous version of which grandly reigned as a sphere-supporting caryatid on the plaza between the two World Trade Center towers until 11 September 2001. A fragile static principle also informs the visual effect achieved in the present Bouquet. A voluminous form is lifted up from a very narrow base, defying, as it were, the law of gravity. It is not the almost transparent lightness striven for by other sculptors before Koenig - some equestrian statues have achieved notoriety in this respect - that Koenig is after. He wants something more than that. His exploration of converging forces generates tension and a dynamic that lends his sculpture an aspect of visual presence in space that transcends its overall design. [KD]
EXPERTISE: We are grateful to Dr. Dietrich Clarenbach, Gauting for his help in cataloguing this lot
PROVENIENZ: Private collection Baden-Württemberg (acquired directly from the artist).