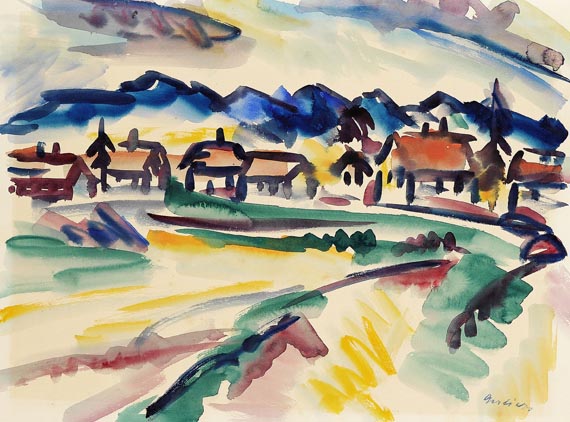 Dorfansicht. Um 1920.
Watercolour.
Signed lower right. On light cardboard. 36 : 47,8 cm (14,1 : 18,8 in), the full sheet. Born in what is now Slovenia in1871, Emil von Gerliczy embarked on a military career. After marrying in 1897, however, he left the service and devoted himself to travel and painting. Robert Sterl, director of the Dresden Art Academy, made it possible for von Gerliczy to train as a painter and forge links with artists in Dresden. Meeting Emil Nolde in 1905 proved of crucial importance to Gerliczy and exerted a lasting influence on his work. Another important stimulus was contact with “Die Brücke”. Emil von Gerliczy made good use of his extensive travels to garner new visual experiences and thus broaden the compass of aesthetic expression available to him. [NB]