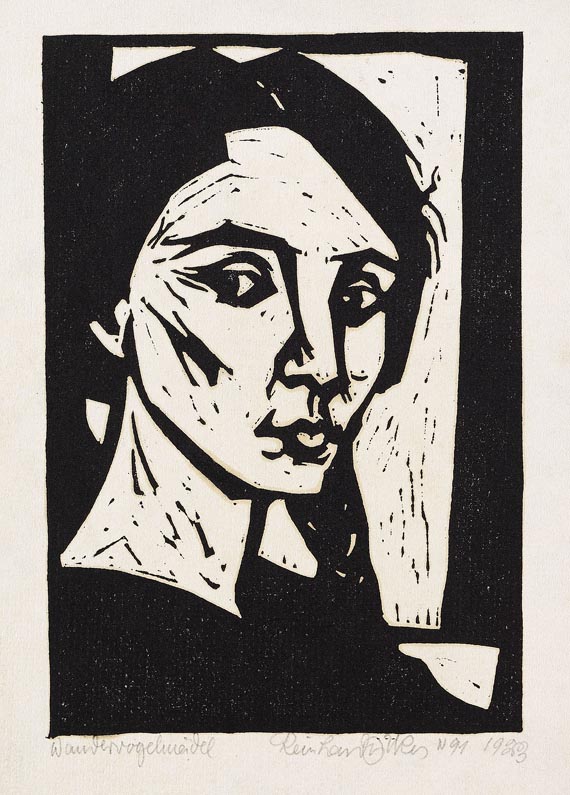 Wandervogelmädel. 1923.
Woodcut.
Signed, dated, titled and inscribed "N 91". On imitated Japon with linen embossing. 24 : 16,3 cm (9,4 : 6,4 in). Sheet: 30,5 x 20,5 cm (12 x 8,1 in). Reinhard Hilker was deaf and mute. From 1914 to 1918 he attended the Municipal Painting School in Hagen, where his teacher, Max Austermann, recognised Hilker’s talent early on. During that time the aspiring painter met Christian Rohlfs and became close friends with him for life. In 1919-20 Hilker was a member of the class taught by Lyonel Feininger at the State Bauhaus in Weimar. By 1920 Hilker had had his first solo show, at the Folkwang Museum in Hagen. During the 1920s Hilker was a member of the artists’ group known as “Der Fels” [“The Rock”] and the Hagenring Artists’ Association. He sold works to several museums and was acclaimed throughout Germany. Apart from expressive woodcuts, Hilker produced paintings, many of them featuring motifs with overtones of social criticism. In the 1950s important exhibitions were devoted to Hilker’s work at museums in Hamm, Münster, Witten and Hagen. [KD]