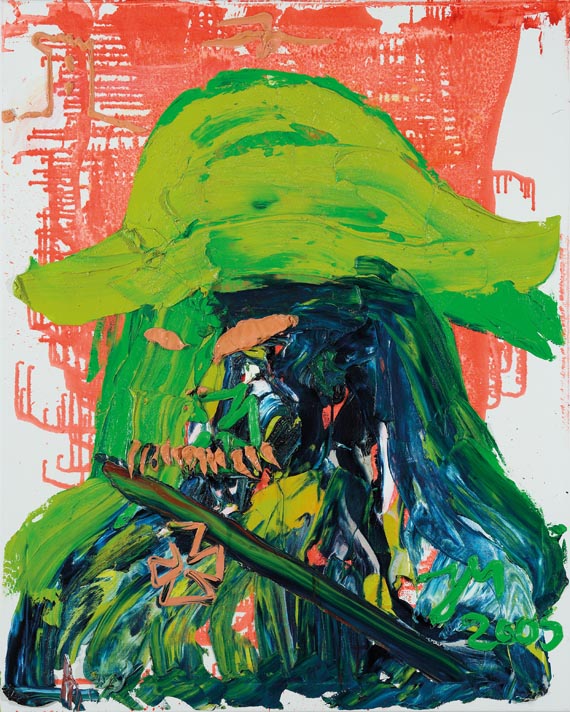 Fischmammsell, der Erbdebuty in gebratener Dillsauce mit Bärenmusäuglein (Kokain VIII). 2005.
Oil on canvas.
Monogrammed and dated lower right. Signed, once more dated and titled on the reverse. 100 : 80 cm (39,3 : 31,4 in). Jonathan Meese was born in Tokyo on 23 January 1970 to a German-Welsh couple. Growing up in Ahrensburg, Holstein, near Hamburg, Meese studied from 1993 to 1998 at the Hochschule für bildende Künste in Hamburg with Franz Erhardt Walther. Dropping out before graduation, Meese was given a contract in 1997/98 with the renowned Berlin Contemporary Fine Arts Gallery. Within the space of just a few years he had produced a diverse œuvre in all available media and materials, accompanied by frenetic exhibition activity and a heavy presence in the media. Complex multimedia installations that intervene in space developed out of “Meese stands”, assembled by dint of avid collecting and accompanied by complex performances and readings. Imaginary film heroes, historic figures with negative or tragic associations and characters from myth and legend are the cast here, accompanied by Meese self-portraits in various poses and masks as well as cryptic neologisms added in his own handwriting. Since the turn of the millennium, the Installations have been heightened another notch into walk-in environments and spatial wings, in which bronze sculptures in the Art brut style as well as Neo-Expressionist paintings have also been introduced. The work Meese has produced in recent years has encompassed a wide range of activities, including collaborative works undertaken with artists such as Albert Oehlen and Daniel Richter, artists’ books, pamphlets, illustrations and stage design.

In our work, the artist has succeeded in producing a translucent yet impenetrably gloomy-looking self-portait, which emerges from intensely vibrant, forcefully applied streaks of colour and is occupied by mysterious attributes. As so often with Jonathan Meese’s work, the artist himself has become the leading character in his art and is woven into a rich fabric of associations. Historic figures, heroes of myth and bleak characters from film are omnipresent in his work and usually also in his language. Using all media and materials imaginable that are available to him, he creates an œuvre that is distinctively his own, fantastic and laden with bathos.

Meese’s works have been presented in innumerable solo shows and are represented in distinguished public collections. The artist lives and works in Ahrensburg and Berlin. [NB]

In good condition. Barely noticeably shop-soiled in the pastose areas.

More Information
+
Sell
Get a free appraisal for a similar object!
+
Register for
Jonathan Meese
+
Buying from A-Z
+
Contact a specialist
Share