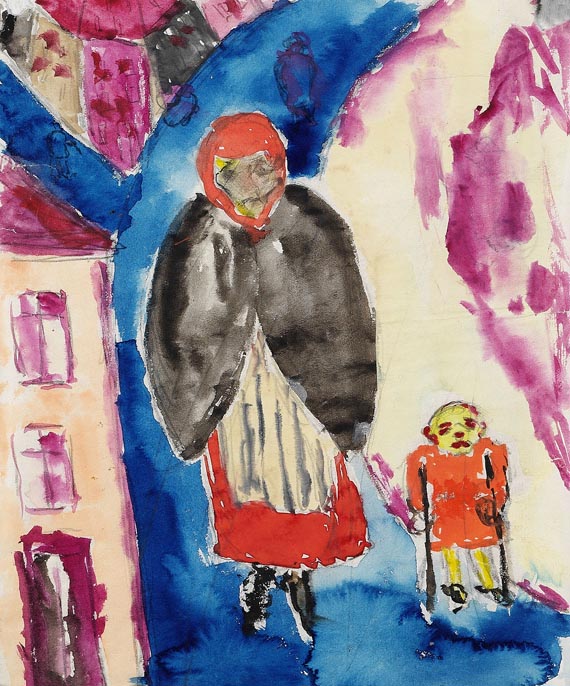 Der kleine Krüppel. Um 1918-1920.
Watercolour and pencil.
On fine wove paper (with perforated edge). 20 : 16,3 cm (7,8 : 6,4 in), the full sheet. Lis Bertram-Ehmsen studied at the Royal School for the Applied Arts in Barmen from 1915 to 1919, continuing her studies from 1922 in Munich with Hans Hofmann. There she met Heinrich Ehmsen, with whom she travelled widely, spending several months in the Soviet Union in 1932. The couple’s friends included Maurice de Vlaminck, Karl Hofer, Max Pechstein and Karl Rössing. In the late 1920s, Lis Bertram-Ehmsen began to produce socially critical works showing life in the Ruhr region. In 1929 she was represented with twelve watercolours at the exhibition “10 Jahre Novembergruppe” [“Ten Years of the November Group”] at the Lehrter Station in Berlin. An expressive palette and fleeting but deft handling make the present watercolour a particularly memorable work. [AS]

PROVENIENZ: From the artist's estate (acquired from Galerie Dürr, Munich in 2004).

In good condition, colours still fresh. Small losses (up to ca. 1 x 1 cm) in the upper corners. Tiny split in the lower edge.