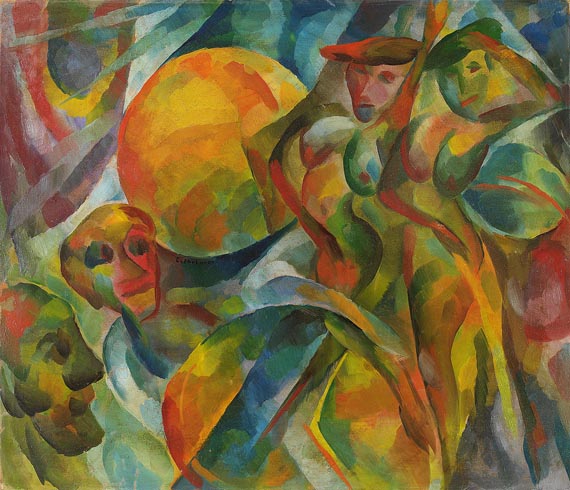 Theatre. Um 1920.
Oil on cardboard.
Signed in the image. Once more signed, titled and inscribed "Brandenburg" on the reverse. 60,5 : 70 cm (23,8 : 27,5 in). The Roaring Twenties were not the Golden Age they were so often purported to be. In Germany at least they were marked by crass social contrasts. In Berlin and other large cities a culture grew up that sought oblivion in cheap entertainment, music-halls and what amounted to highly visible prostitution. Those were the qualities that inspired nearly all painters living there at the time. Low dives or the lights of the big-city revue, the uninhibited display of female charms were among the most popular themes of the era. Ehrhardt was also inspired by them. Linked with handling that was determined by an expressive palette, his approach to the subject matter was not so harshly critical as that adopted by George Grosz and Otto Dix. Nevertheless overtones of social criticism are also undeniably present in Ehrhardt’s work despite the colourful diversity of forms. [KD]
EXPERTISE: We are grateful to Prof. Dr. Peter Arlt, Gotha, for his help in cataloguing this lot
PROVENIENZ: Private collection Brandenburg.
Private collection Hesse.