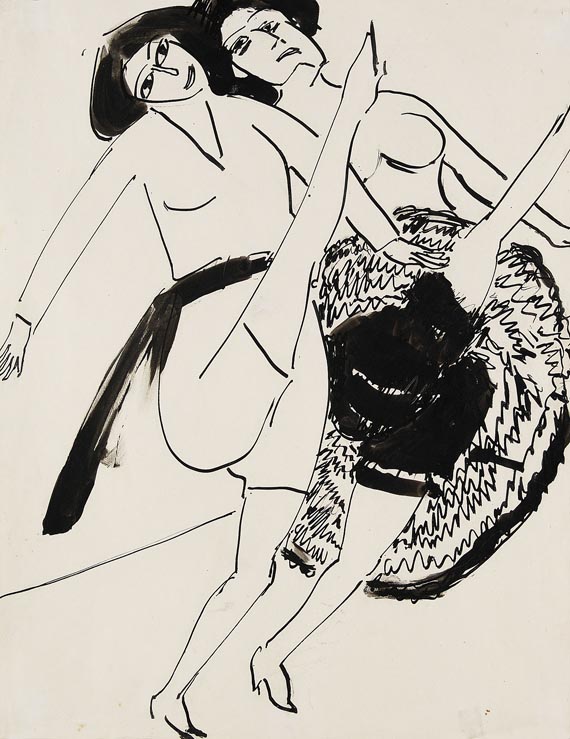 Zwei Tänzerinnen. Um 1910/11.
Brush and India ink drawing.
With the estate stamp of the Kunstmuseum Basel (Lugt 1570b) and the handwritten registry number "F Dre/Be 23" on the reverse. On firm paper. 44,8 : 35 cm (17,6 : 13,7 in), the full sheet. [NB] Like so many of his contemporaries, Ernst Ludwig Kirchner was keenly interested in what cabaret, music-hall and the circus had to offer him as a painter. Before him, the Impressionists had mined the subject matter for what it was worth, most notably Degas, Toulouse-Lautrec and Seurat. Ernst Ludwig Kirchner’s paintings and drawings provide numerous examples of their creator’s avid interest in music-hall shows and dancing. The ‘Cake Walk’ being danced with so much verve in our drawing was an American import. It was performed almost like a sporting event in Berlin and other large German cities with the precision of Prussian drill. In reality, this German version of the Cake Walk was a parody of military drill staged by young women.
Kirchner’s rendition of the lively dance scene fills up the entire sheet of paper. The inner dynamic captured in the diagonal limbs of the figures is enhanced by ingenious distribution of the black and white components. After years in Dresden, moving to Berlin was liberating for Kirchner. His style changed, became more dynamic to match the rhythm of that exhilarating era in Berlin.
EXPERTISE: This work is recorded at the Ernst Ludwig Kichner Archiv, Wichtrach/Bern
PROVENIENZ: Stuttgarter Kunstkabinett Roman Norbert Ketterer, auction 37, 5 May 1962, lot 731.
Galerie Theo Hill, Cologne.
Kornfeld und Klipstein, Bern, auction 112, 27 May 1964, lot 543.
Private collection Baden-Württemberg.

Good overall impression. Lower edge unevenly trimmed and with a minor bump. Upper corners as well as lower edge with remains of an old mount on the reverse, minimally pushing through to the front. Upper corners with minor crease marks. With isolated tiny brown stains as well as minor traces of rubbing. With a minor thin spot in the centre.