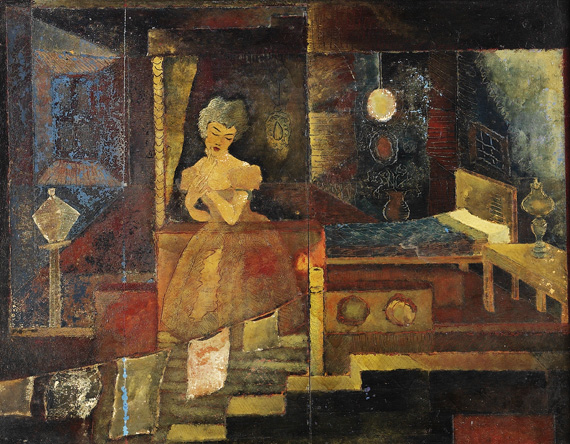 Interieur mit Dame. 1946.
Oil on panel, partly scratched.
Signed, dated and inscribed on the reverse. 38 : 51 cm (14,9 : 20 in). René Halkett is the pseudonym of Georg Freiherr von Fritsch, who was born in Weimar and trained at the Weimar Bauhaus in the mid-1920s. In 1936 he emigrated to Britain, where he remained and was naturalised in 1946.
He produced “wonderfully beautiful imaginative dreamworlds and reminiscences of the Bauhaus, which [...] were never lost to him and lived on in him. These works are highly revealing, often openly showing many aspects of his private, intimate life as an artist, reflecting despair and yearnings, depicting his domestic surroundings and invoking an open declaration of love to his wife, who had died long before him.” (Rudolph Remmert, in: G. René Halkett (1900-1983). Malerei & Grafik, Exhib. cat. Galerie Spermann, Berlin 1994, p. 3). [NB]

A vertical drying crack along the junction of the two wood panels. An exposed nail head on the centre. Partially with minor craquelé. With small colour flakings and soft colour abrasions respectively. left image half partially with matt surface.