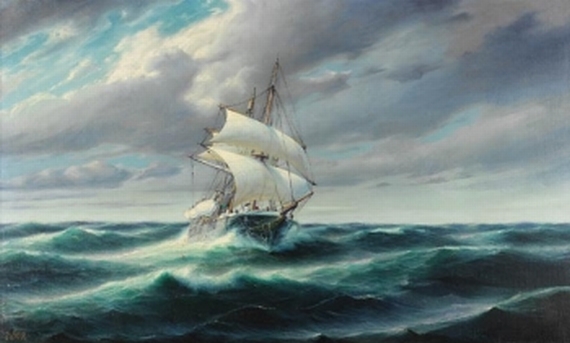 Dampfwalfangschiff im nördlichen Eismeer. Um 1910.
Oil on canvas, doubled.
Signed lower left. 60 : 100 cm (23,6 : 39,3 in). Rave, acknowledged sea and marine painter, is a member of a German polar expedition, who later captures the history of seafaring in more than 300 paintings. Being a good friend of Graf Luckner, he also portraits his "Seeadler". He depicts a steamer from the last generation of whalers in the Arctic Sea in the late 19th century. Rigged as a bark, the steel ship was extremely easy to manoeuvre in pack ice, due to its steam engine and its propeller drive, a modern harpoon is visible on the railing. [UB]