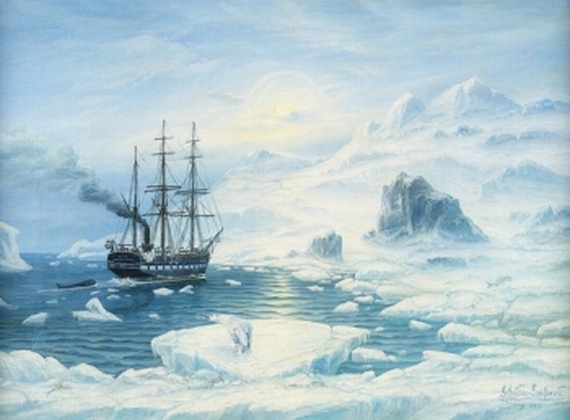 Walfang im Eismeer. 1928.
Oil on canvas.
Signed, dated and inscribed "B" (for Berlin) lower right. 51 : 70 cm (20 : 27,5 in). Schröder-Greifswald, widely travelled seaman at first, works as a marine painter and illustrator in Greifswald as of 1885. His portraits of ships of the Imperial fleet can be found in many collections. A similar work by the artist from 1926 is part of the exhibition "Walfang und Expedition" [whaling and expedition] in the Deutsche Schiffahrtsmuseum in Bremerhaven. A whaling steamer, typical for the second half of the 19th century, manoeuvres under engines near the pack ice frontier. The ship, rigged as a bark, hauls a hunted whale. The deep arctic sun is surrounded by the so called halo effect, a special weather phenomenon. [UB]