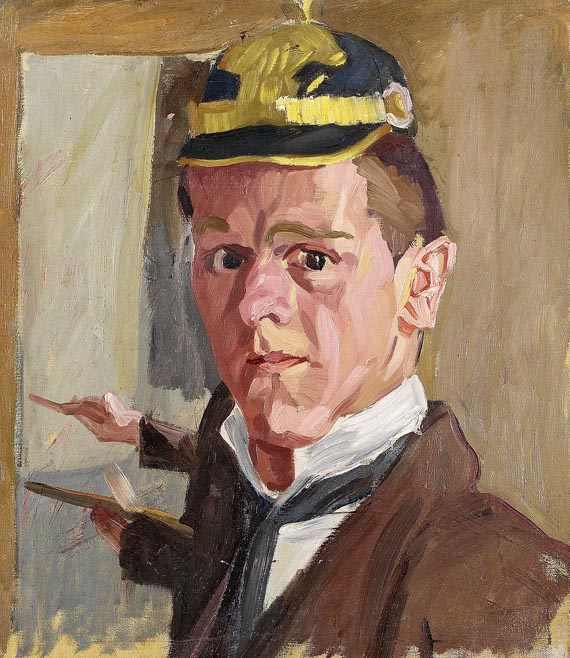 Selbst mit Pickelhaube. Um 1913.
Oil on canvas, mounted on fibreboard.
59,8 : 52 cm (23,5 : 20,4 in). Born in Hamburg on 24 October 1895, Carl Lohse attended the State School for the Applied Arts as well as Arther Siebelist’s painting school in 1909-10. The director of the Hamburg Kunsthalle noticed the young Lohse and became his patron. Lohse was given a Kunsthalle grant, which enabled him to study painting at the Weimar Academy in 1912-13. Here he met Otto Pankok, with whom he formed a close friendship. By the late 1920s Carl Lohse had produced an important and powerfully expressive body of early work, in which the portraits stand out as exceptional.

Our painting dates from Lohse’s student days in Weimar. The composition of this self-portrait, with the artist in front of his easel, reflected in a mirror and a spiked helmet as his attribute, still has something of the awkwardness to be expected in an eighteen-year-old student; by contrast, the handling is assured. The face has been worked out with a few broad, expressive pastose brushstrokes. The artist’s surroundings are merely suggested: the lower edge of the picture trails off into a sketch. As early as it is, this painting is notable for the skilful handling that would distinguish the late portraits, in which Carl Lohse eschewed attributes in order to concentrate on colour and its powers of expression in portraying his sitter.

From 1914 until 1916 Carl Lohse served on the French front and was lucky to survive. Interned as a prisoner of war, he did not return to Hamburg until 1919. Lohse took part as a guest in the “1919 Dresden Secession” exhibition at Galerie Arnold. Lohse had his first solo show in 1921 in Dresden. Around 1929 Carl Lohse moved from Hamburg to Bischofswerda, where he would spend most of the rest of his life. During the second world war he had to give up his artistic work, but resumed exhibiting in 1946. Lohse died in Bischofswerda in 1965. [KD]
EXPERTISE: The work will be included in the forthcoming catalogue raisonné, prepared by Ophelia Rehor, Bautzen
PROVENIENZ: Private collection South Germany.