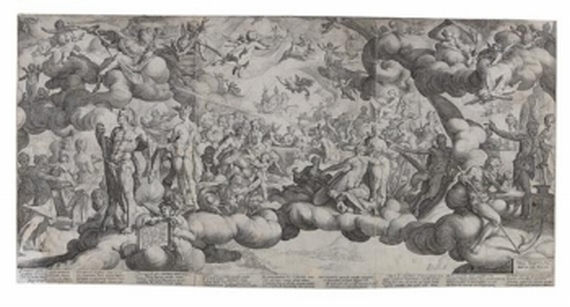 Die Hochzeit von Amor und Psyche. 1587.
Engraving from three plates, after Bartholomäus Spranger.
Bartsch 277. Hollstein 322 III (of IV). Strauss 255 III (ofIV). Signed and dated on the plate. Nice and even print on laid paper with Visscher's address. Mainly with narrow margins, partially also with margins cropped close around the bordering line and the text margin. 42,8 : 85,5 cm (16,8 : 33,6 in), the full sheet. Largest and most popular of the Goltzius engravings after Spranger, who was highly acknowledged by his contemporaries for the large amount of figures depicted. The preliminary drafts by Spranger are in possession of the Rijksprentenkabinett, Amsterdam (Boon 41).

Appealing overall impression with some well-restored defects. Lower left and upper right corner each with a defective spot in the image and the margin and the text margin respectively, thoroughly mended in black Indian ink. Two end-to-end horizontal crease marks with marginal tears, that have been skilfully smoothed and restored and a few more padded splits. Small marginal defects, that have also been carefully padded. With slight surface abrasions in places and with few insignificant crease marks. [UB]