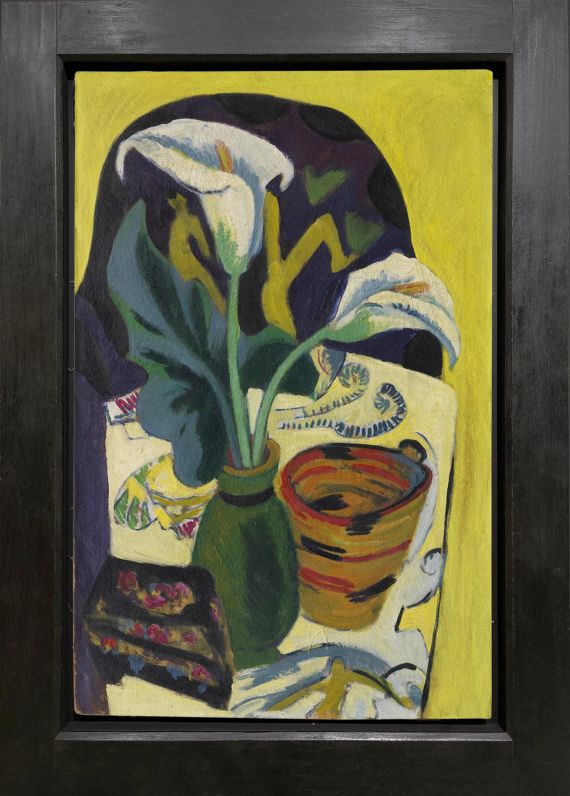 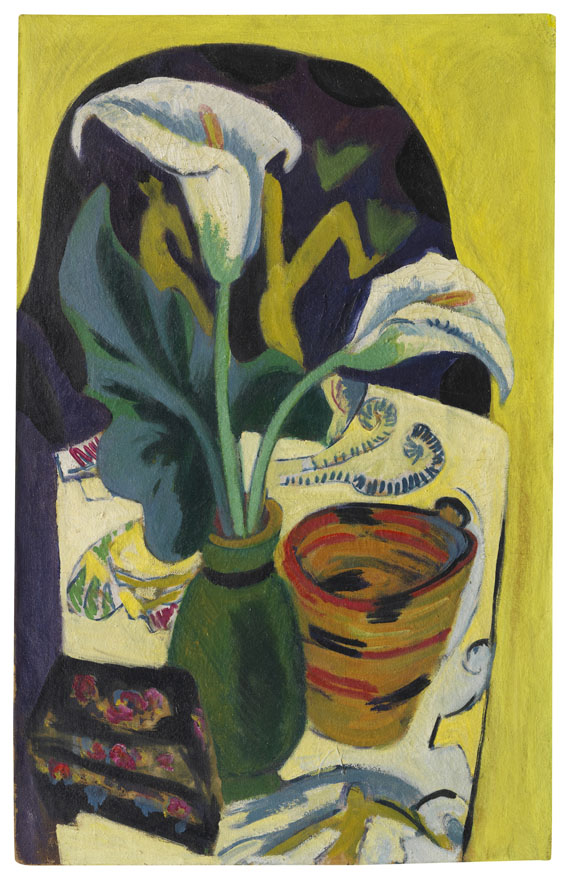 • From the most intensive time of the "Brücke" style.
• The architect E. L. Kirchner combines top view and frontal perspective to form a fascinating composition.
• Kirchner's still lifes make his very personal envrironment experiential.
• Part of the same private collection for more than 50 years.
• Consistent provenance.
• In 1960/61 part of a grand traveling exhibition with works of German Expressionism.
• Other Kirchner still lifes are at, among others, the Metropolitan Museum in New York, the Aichi Prefectural Museum of Art in Nagoya (Japan), the Von der Heydt-Museum in Wuppertal and the Museum Ludwig in Cologne.

This work is documented in the Ernst Ludwig Kirchner Archive, Wichtrach/Bern.

PROVENANCE: From the artist's estate (Davos 1938, Kunstmuseum Basel 1946, with the hand-numbered estate stamp on the reverse).
Galerie Roman Norbert Ketter, Campione d'Italia (with labels on the stretcher).
Private collection Northern Germany (acquired from the above in 1969).
Ever since family-owned.

Depictions of the studio as a mirror of the working environment and the artist’s way of life, reached a first impressive peak in Ernst Ludwig Kirchner’s art in Dresden around 1910. The artist used the place as the pictorial content in a large number of works. The motif always appears anew and is atmospherically altered in different ways. The pictures show, for example, Kirchner's Dresden studio in Friedrichstadt in the former craftsman's shop on Berliner Strasse. In later works from November 1911, made after he had moved to the up-and-coming metropolis of Berlin, Kirchner showed his studio on the attic floor on Körnerstrasse as a place of retreat for an anti-bourgeois, bohemian lifestyle. He painted his self-made interior, murals, wall hangings, screens adorned with mostly erotic scenes, with carved furniture and everyday objects, with sculptures by his own hand as well as with objects from indigenous cultures. These objects recur in the backgrounds of numerous paintings and still lifes, as in the present "Stilleben mit Kalla", thus becoming a document for a precise determination of place and time, and in their apparently casual staging, they are also props in a well-thought-out studio art. Studio scenes with backgrounds determined by props can be found in many of Kirchner's works, so that the studio and its rich decoration and the artist must be seen as one. For Kirchner, the studio was not just his workshop, but also a self-created world, the coexistence of pure creativity and a mental stimulant.
In December 1910, the Hamburg magistrate Gustav Schiefler, who was both a passionate collector and an expert in German Expressionism, visited Kirchner in Dresden and described the richly decorated studio as follows: "Acting from necessity, he rented a sort of strange studio on a suburban street in Dresden: a narrow grocer's shop that opened onto the street with a large window and next to which a small room served as bedroom. These rooms were fantastically furnished with brightly colored fabrics he had made himself in batik technique, with all sorts of exotic utensils and with wood carvings of his own hand: a simple environment, born of necessity, while his personal taste made for a certain sophisticated ambiance. He lived a way of life unregulated by bourgeois standards, with simple material means, but discerning in his artistic sensibilities. He worked feverishly, not worrying about the times of the day." (Quoted from: Gustav Schiefler, Die Graphik Ernst Ludwig Kirchners bis 1916, Berlin 1924, p. 80). In this environment, Kirchner succeeded in bringing decorative and fine arts together, an accomplishment that the generation of artists before him had always pursued. His studio embodied a mixture of ethnological show and the ideas of the cabaret, with models that add an exotic notion to the life in the studio and that catch the attention of the viewer. Kirchner documented this intimate world and provided insight into it in his still lifes.
At a first glance, the section appears to have been chosen arbitrarily, upon closer inspection, however, this proves to be a fallacy, as he chose the arrangement with great care and put together a well-thought-out composition. Kirchner concentrates on the vase with two white, elegant, cup-shaped calla lilies with boldly upward-growing pedicels. A highly erotic impression that may refer to Kirchner's partner at the time, Dodo (Doris Grosse), whom he described in his Davos diary as a "fine spotless cat" (cf. Ernst Ludwig Kirchner's Davoser Tagebuch, ed. by Lucius Grisebach, Ostfildern-Ruit 1997, p. 40). Kirchner's view includes a sculptural, colorful vessel to the right of the vase, a brightly painted casket to the left, embroidered textile art on the table, the whole composition staged in front a wall hanging with dancing nudes. These elements are part of the studio’s furnishings. A photograph that Kirchner shot from a different angle gives us an idea of the diversity and richness of his furnishings.
Kirchner chose the right wall as the background for his still life, he covered the table with a cloth and positioned the vase, vessel and box on it. In the photograph we discover the dancing nudes in the upper edge. This unusual textile element can be found in other paintings and works on paper; Kirchner also demonstrated its flexible use in photographs. In the present still life, contrary to the photograph, Kirchner dispenses with the cushion on the floor behind the table on which Fränzi and her friend Peter once lounged, as another photograph by Kirchner shows. (Fig.)

Interestingly, the painting "Stilleben mit Kalla" remained in his various studios until his death in 1938. After it was created in Dresden, it was part of the shipment to Berlin and ended up in the artist's house "In den Lärchen" in Davos around 1919. Erna Schilling, who looked after Kirchner's studio in Berlin during the artist's years in the military and his stays in various sanatoriums, organized the transport to his new home above Frauenkirch. Kirchner used the new encounter with his work from before the First World War in a clever way, he "restored" one or the other painting, as he called it, in order to give his pictures a more modern, early 1920s character. Kirchner did this very carefully, smoothing the 'nervous' brushwork of the Dresden and Berlin time, condensed, as in the present work, the yellow framing or the blue background of the dancing figures. The artist also changed the table’s top view, making it (probably) more interesting and lively by using embroidered fabrics which only appeared after he had moved to Berlin, where they, among other things, became characteristic of the decoration of his studio. (Fig.) 1920, the beginning of the Davos years, was a year of transition. Kirchner put his doubts behind him and began to come to terms with his new surroundings, the pastures and mountains, his new neighbors, the shepherds and mountain farmers. And for the artist this also meant to adapt his painting style, as is the case with this colorful and unusual still life, to his new ideas of art. [MvL]
More Information
+
Sell
Get a free appraisal for a similar object!
+
Register for
Ernst Ludwig Kirchner
+
Buying from A-Z
+
Contact a specialist
+
Ernst Ludwig Kirchner Biography
Share