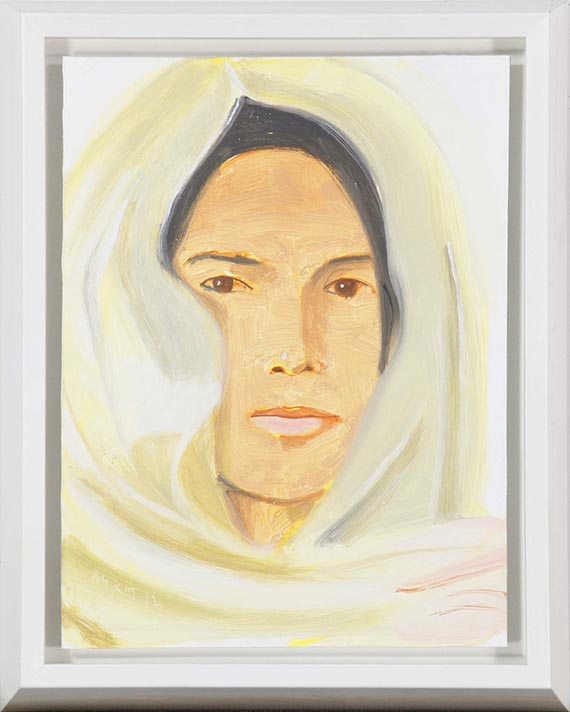 Alex Katz is one of the most important and influential American artists of the past decades, proving to this day that Pop Art is still of importance. The traditional genre of the portrait characterizes the artist's oeuvre just like the landscape. Katz is modern and classic, radical and dignified in form, always controlled and with a cool aloofness that overcomes any sentimentality. In doing so, he repeatedly varies themes from his immediate personal environment: figures, portraits (especially that of his wife Ada), minimalist reduced landscape- and architectural details are fitted into the pictorial surfaces extremely economically. Katz is considered a master portraitist. His often larger-than-life portraits are strikingly staged as close-ups. "Anna" from 2012 proves that this also works in a smaller format: She is a woman on an equal footing, more of an equal counterpart, in contrast to the large formats that tower above the viewer. The zoom-like image section brings her face, wrapped in a cloth, very close to us. The physiognomy is reduced to the essentials, but the individual features are captured with razor-blade sharpness. Katz's interest in his models, most of which stem from his immediate surroundings, has little to do with the person itself. Appearance plays a role, but his approach is systematical and analytical. He devotes himself to the exact color gradations and the texture of skin and hair, the proportions and surfaces of the face, but above all, to their relationship to the incident light. The portraits are the result of a precise observation of nature and remain free of any emotionality. Alex Katz is an internationally renowned artist. He has received numerous awards throughout his career and his works are part of more than a hundred public collections worldwide: from New York's MoMA, Whitney and Metropolitan to Tate Modern in London, the Museum MMK für Moderne Kunst in Frankfurt a. Main, the Albertina in Vienna, the Museo Reina Sofía in Madrid and the Guggenheim in Bilbao. The Solomon Guggenheim Museum currently honors Alex Katz with the grand solo exhibition "Gathering" in his hometown New York from October 21, 2022 to February 20, 2023. The exhibition includes paintings, oil sketches, collages, drawings, prints and his famous "Cut-outs", spectacularly displayed in the museum's Frank Lloyd Wright Rotunda. [SM]
More Information
+
Sell
Get a free appraisal for a similar object!
+
Register for
Alex Katz
+
Buying from A-Z
+
Contact a specialist
Share