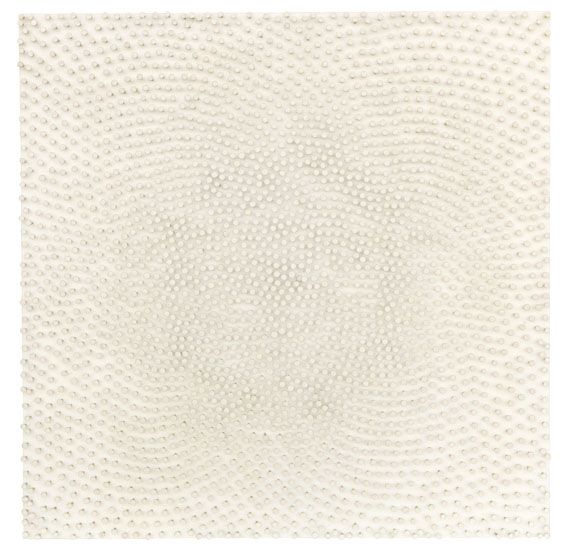 • One of the rare early nail pieces that are particularly convincing for their poetic appeal.
• Early, high-quality document of Uecker's occupation with momentum starting from a center.
• Uecker finds inspiration in nature: Resembling the gentle, fleeting wave formations created by a rock on the water surface.
• Family-owned since it was made and for the first time offered on the international auction market.
• Works from Uecker's significant early creative period are in many international collections, among them the Tate Modern, London, the Museum of Modern Art, New York, and the Centre Pompidou, Paris.

This work is registered in the Uecker Archiv with the Number GU.75.114 and will be noted for inclusion in the forthcoming catalogue raisonné.

PROVENANCE: Private collection Berlin (acquired directly from the artist, ever since family-owned).

"When you look at my works, you will realize that they obtain their reality through light. Their intensity depends on light incidence that changes with the observer's position. These objects ask you to become active, which makes for their liveliness."
Günther Uecker, quoted from: Dieter Honisch/Museum Folkwang Essen (ed.): Lenk, Mack, Pfahler, Uecker, XXXV Biennale di Venezia. Padiglione Tedesco, Stuttgart 1970, issue "Uecker", p. 4.

In Uecker's oeuvre, the nail as an anonymous, industrial product becomes the carrier of intense spiritual expression, the shaper of poetic creations that could hardly be more gentle and more subtle, especially in his early works. In "Kreis, Kreise (Interferenzen)" from 1975, Uecker examines the physical principle of superimposed waves, which is often found in nature. Whether its the gentle superimposition of wave-like motions wind creates on a cornfield or the circular, partly overlapping wave formations a rock makes when thrown into the water. Wide fields, water, wind, trees, sand and sea have always been the artist's most important sources of inspiration, phenomena of nature that inspire Uecker to his unique creations. Under the title "Kreis, Kreise", Honisch mentions a first nail work for 1965 in the format of 60 x 60 cm. The theme would then become one of the central impulses in Uecker's early work and would recur regularly - also occasionally under other titles - whereby the nailing became increasingly dense and subtly modulated up to the 1970s - as is also the case in our fascinating composition. In contrast to the white nail fields, of which a particularly early one from 1964 is in the collection of the Museum of Modern Art, New York, the emerging group of motifs as in "Kreis, Kreise (Interferenzen)", is characterized by overlapping motions that move outwards from a center, which give the nailing a tension and dynamic appeal reminiscent of Uecker's rotating "Lichtscheiben” (Light Disks), also from his early creative period. From the 1980s onwards, the examination of motion became increasingly coarse and more powerful in its visualization. Uecker's work has remained true to this day, and yet has changed constantly. It has become rougher and thus more powerful and dynamic, but at the same time has never again attained the fascinating poetry of expression of his early nailings with their gently balanced motions. Apparently weightless and fleeting, these softly modulated structures float past our eyes, transform and come alive through the change of light and fascinate us anew every day. [JS]
More Information
+
Sell
Get a free appraisal for a similar object!
+
Register for
Günther Uecker
+
Buying from A-Z
+
Contact a specialist
+
Günther Uecker Biography
Share