Lot 146
Back side
Frame image 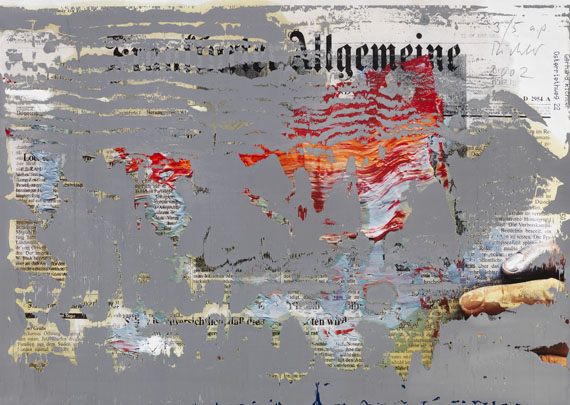 enlarge image
+
146
Gerhard Richter
FAZ-Übermalung, 2002.
Multiple. Oil (scraped) over offset print
Estimate:
€ 80,000 / $ 75,200
Sold:
€ 108,750 / $ 102,225
(incl. surcharge)
FAZ-Übermalung. 2002.
Multiple. Oil (scraped) over offset print.
Butin 122. Signed, dated, numbered and inscribed "a. p." in upper right. Verso of the backing board with a label inscribed with the artist's name, the date, the title and the number, as well as with the technique and the dimensions in typography. Unique object. One of 5 artist proofs aside from the edition of 32 copies. On smooth cardboard, mounted on cardboard. 39 x 55 cm (15.3 x 21.6 in).
The offset print was made after a photograph of an issue of the newspaper Frankfurter Allgemeinen Zeitung (FAZ) from February 2001, printed by Rotadruck Armin Weichert, Berlin. Published by Gerhard Richter, Cologne, and Galerie Fred Jahn, Munich. [CH].
• Looking back on a sixty year long career, Gerhard Richter is considered on of the most important artists of the present day.
• Through the combination of photography, print and squeegee painting, Richter created a symbiosis in this work that is characteristic of his entire œuvre.
• Each copy is of unique character.
• The photograph this work is based on shows the artist's daubed hand: a reference to both his craftsmanship and creativity.

PROVENANCE: Galerie Fred Jahn, Munich (directly from the artist).
Private collection Hesse (acquired from the above).

Richter's famous "Abstract Pictures", created with the squeegee - a broad wooden, rubber or aluminum spatula - were created in the 1980s and count among the internationally most sought-after works in his oeuvre. Ever since, the smeared treatment of areas of paint applied with a brush, with the squeegee has become a characteristic of Richter's painting. The individual color structures created with the squeegee are always unplanned and unpredictable and therefore a product of chance. This way Richter combines creative calculation and the element of chance, as well as construction and deconstruction.

The present work is based on a photograph by Alfred Seiler, made in 2001 for the famous advertising campaign titled "Dahinter steckt immer ein kluger Kopf" (There is always a clever head behind it) for the daily newspaper Frankfurter Allgemeine Zeitung (Scholz & Friends, Berlin). Richter first covered the newspaper with grey, white, red and orange oil paint and treated it with the squeegee, before Seiler shot the photograph of the artist with the newspaper in his hand. In the subsequent process, the photograph served as template for an offset print, which Gerhard Richter again scraped with light gray oil paint for the series "FAZ-Übermalung" (FAZ Overpainting). The result is an fascinating combination of painterly superimposition and a symbiosis of masking and translucency.

With the help of a wide variety of artistic processes, Richter gets from the scraped-over newspaper over its photography, its transfer into a print template, to the renewed painterly scraping, and thus not only plays with the artistic possibilities available to him, but also with the definition and meaning of classical painting and the traditional concept of art. Instead of a classic brushstroke, Richter works with the squeegee and with the photograph of his hand stained with oil paint - the hand of the master – referring to his technical skills and his ingenious artistic creativity. [CH]
More Information
+
Sell
Get a free appraisal for a similar object!
+
Register for
Gerhard Richter
+
Buying from A-Z
+
Contact a specialist
+
Gerhard Richter Biography
Share