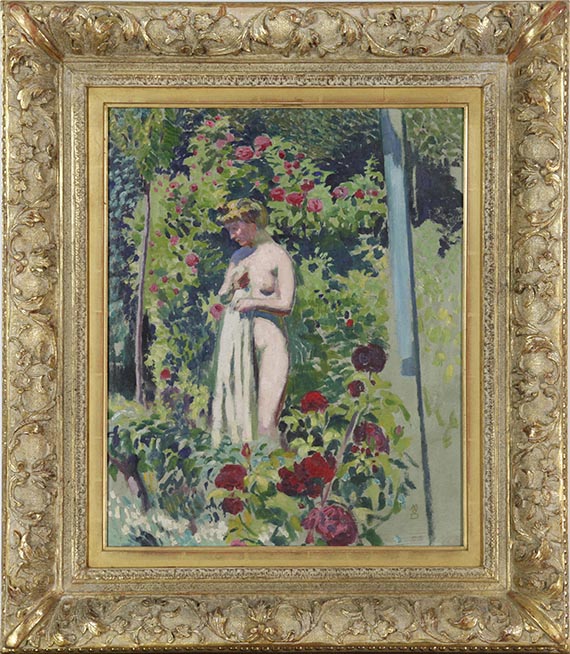 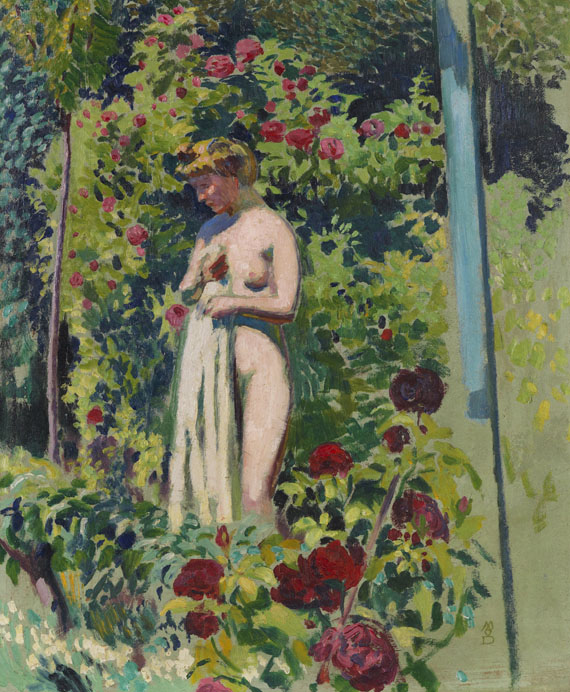 With a written expertise from Dominique Denis, the artist's son, St. Germain-en-Laye, dated April 20, 1989.
Accompanied by a certificate issued by Claire Denis and Fabienne Stahl, Catalogue raisonné de l'oeuvre de Maurice Denis, from October 26, 2022. The work is registered under the number 906.0010.
We are grateful to Ms Claire Denis, the artist's grand-daughter, and Ms Fabienne Stahl, for their kind support in cataloging this lot.

Around the years 1906/1907, Maurice Denis produced a number of studies and paintings in the garden of his home and studio in St.-Germain-en-Laye in the west of Paris. Alphonsine Zabé, his favorite model at the time, often posed for his garden nudes, many of which were subsequently exhibited in a solo exhibition at the renowned Bernheim-Jeune Gallery. The gallery’s program primarily featured Impressionist, Symbolist and avant-garde artists such as Auguste Renoir, Claude Monet, Henri Matisse, Felix Fénéon and Paul Signac. Studies of Arcadian harmony between man and nature form a central part of Maurice Denis’ repertoire of motifs. In 1907, for instance, the artist painted the large-format work “The Bathers” (Städel Museum, Frankfurt), interpreting studies of nudes in various poses in his cloisonnist, linear and spatial style. Having developed this decorative style partly as a result of Paul Gauguin’s influence, Denis carried it to perfection in his idyllic-idealized forest and garden landscapes, which were often populated by bathing nymphs or priestly white-robed women. In 1906/07 he was also working on the décor of the Moscow city palace owned by Ivan Morozov, an eminent Russian collector of the French avant-garde (1871-1921) who had commissioned Denis to portray the mythological story of Cupid and Psyche. The Impressionist lightness of this painting reflects the tangible inspiration of such Arcadian paradise scenes created by one of the most important Symbolist artists of the turn of the century. [KT]
More Information
+
Sell
Get a free appraisal for a similar object!
+
Register for
Maurice Denis
+
Bidding Options
+
Written bid
+
Buying from A-Z
+
Contact a specialist
Share