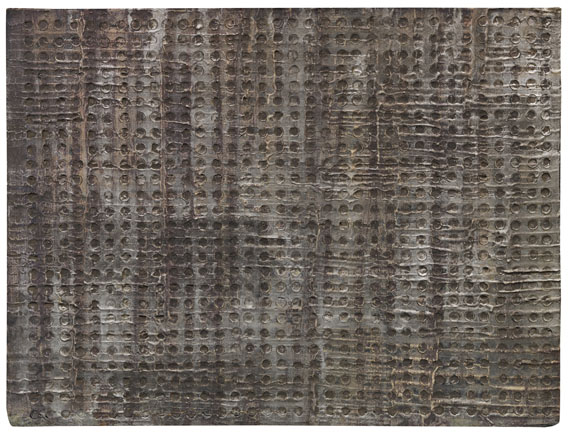 • This is one of the first famous grid pictures that were made from 1957 on.
• Made a year before the formation of "ZERO" (1958–1966), through which Piene, Mack and later also Uecker would revolutionize post-war art that had previously been dominated by the painterly gesture.
• Wonderful reduced black-brown, gray and silver color waves.
• Piene's early grid pictures are very rare on the international art market.
• Other works from this period are at, among others, the Städel Museum, Frankfurt a. Main (Rasterbild, 1959), the Museum of Modern Art, New York (Ohne Titel, 1959), and the Centre Pompidou, Paris (Pure Energy III, 1959).

In 1957 Piene created his first "Rasterbilder“ (Grid Pictures) as first manifestations of the "ZERO" demand for a purified art, cleansed of all subjectiveness, and a clear rejection of Tachism, which dominated the international art scene at the time. Through the semi-mechanical production of the "grid pictures", Piene met the demand for an art that, as a synthesis of nature and technology, should appeal to reason and feeling at the same time. The artist presses the oil paint onto the image carrier through grid screens, which he created by punching holes. Depending on the type of screen used, the most diverse structures emerge on the monochrome background. In the case of this early composition, Piene made a punched and gridded cardboard the structure-determining image carrier. In order to dynamize the pictorial space, to set it into an optical vibration, Piene initially used dark colors in combination with shimmering metallic colors such as silver or gold. [JS]
More Information
+
Sell
Get a free appraisal for a similar object!
+
Register for
Otto Piene
+
Buying from A-Z
+
Contact a specialist
+
Otto Piene Biography
Share