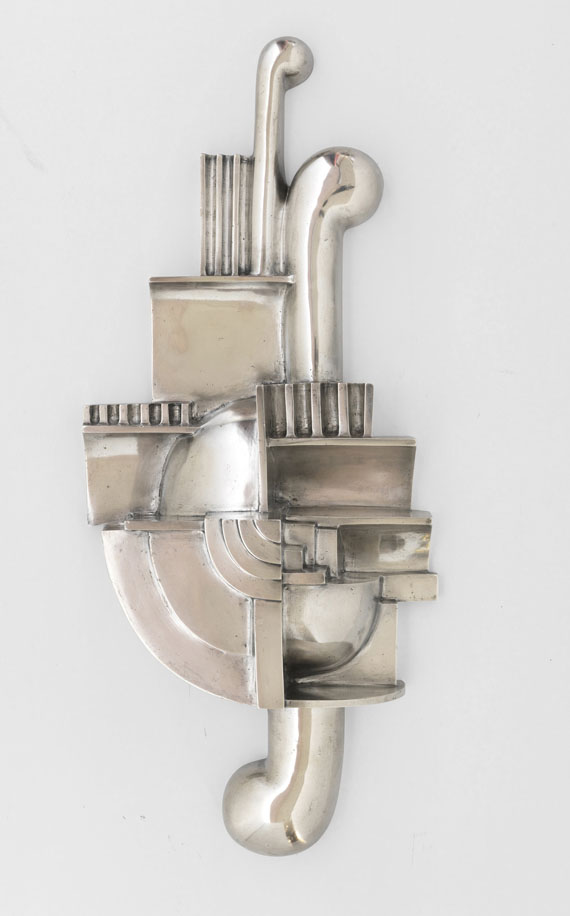 "I care little about sculptures [..] Oskar Schlemmer and Wilhelm Lehmbruck are among the exceptions."

In 1918, Oskar Schlemmer was in his last year at the Stuttgart Academy, when disputes about his master class teacher Hoelzel and his innovative teaching methods caused a disturbance among the student body and the faculty. Things culminated in Hoelzel's resignation, when Oskar Schlemmer, who had been elected student representative, tried to bring Paul Klee into play as his successor, however, this plan failed. Oskar Schlemmer, along with Willi Baumeister, Gottfried Graf, Edmund Daniel Kinziger, Albert Mueller and Hans Spiegel, founded the artist group 'Üecht' in 1919 (from: Swiss "Uechtig" = powerful, efficient; "uohta" (Middle High German) = dawn). Like many others, the artists hoped for a renewal of art and society, and especially for an end of the decrepit structures at the Stuttgart Academy, as well as for a comprehensive reform of art education in general. The program that Schlemmer proposed to the Württemberg Ministry of Education in this context ultimately corresponded to the structures implemented at the Bauhaus a little later.

At first, the group organized an autumn show of new art at the Württembergischer Kunstverein. Oskar Schlemmer was able to win over a number of artist represented by the gallery "Der Sturm" for the exhibition, where they showed their works in an extra room. Oskar Schlemmer, who had previously only made two-dimensional works, showed his first reliefs in the exhibition. In 1920, he was able to show these works at Herwarth Walden's "Sturm" gallery in Berlin, which brought him into contact with the circle of international modernists (fig.). Hence the year 1919 was of seminal importance for Schlemmer's future career.

"Ornamentale Plastik auf geteiltem Rahmen" (Ornamental Sculpture on Divided Frame), now part of the Kunstsammlung Nordrhein-Westfalen (North Rhine-Westphalian Art Collection), was also among the works shown in aforementioned ‘Herbstschau Neuer Kunst’ (fig.). The sculptural centerpiece of this work, which von Maur's catalogue raisonné mentions as the first sculptural work, also exists as a plaster cast without a polychrome, divided frame. In 1965, Schlemmers' widow Tut commissioned the Brotal foundry in Mendrisio to make the cast of this composition in silver.

The "Ornamental Sculpture" is Schlemmer's only sculptural work that does not represent a figural abstraction. A watercolor from 1919 (v. Maur A 60) suggests a possible intention, which Schlemmer described on the backing cardboard as "curtain design (application) for the 'Triadic Ballet' 1919" at the Bauhaus a little later (fig.). The first studies on the costumes were made as early as 1916. The forms used in the ornamental sculpture are reminiscent of organ pipes or the outlines of musical notes. One can certainly speak of a musical ornament here, as Schlemmer also had a profound interest in music, to which costumes and scores for the "Triadic Ballet", as well as the "Ornamental Relief" testify. [EH]
More Information
+
Sell
Get a free appraisal for a similar object!
+
Register for
Oskar Schlemmer
+
Buying from A-Z
+
Contact a specialist
+
Oskar Schlemmer Biography
Share