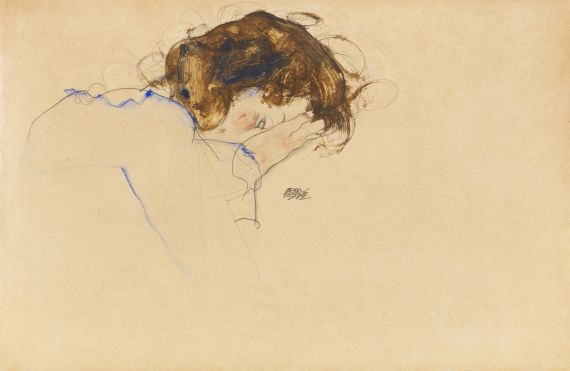 enlarge image
+
31
Egon Schiele
Schlafende, 1912.
Gouache, watercolor and pencil drawing
Estimate:
€ 250,000 / $ 235,000
Sold:
€ 262,500 / $ 246,750
(incl. surcharge)
Schlafende. 1912.
Gouache, watercolor and pencil drawing.
Kallir D 1105. Signed and dated in right center. 31.7 x 48.1 cm (12.4 x 18.9 in), size of sheet.
[CH].
• Tender watercolor in a confident presentation in which the execution of the hair attains a fascinating haptic presence.
• From the renowned Serge Sabarsky Collection.
• Impressive international exhibition history: shown at, among others, the 40th Venice Biennale in 1982.
• The year this work was made, Schiele was shortly imprisoned for his scandalous lifestyle and a judge burned one of his draiwng during a court session.


"One of the most exciting draftsmen in the history of art."
Grace Glueck, Egon Schiele. The Draftsman as a Painter, New York Times, July 26, 1985.

"Only three years after Schiele's death, his exceptional importance as a painter and as a draftsman is already established."
Hans Ankwicz-Kleehoven, Zu Egon Schieles Gedächtnis, in: Wiener Zeitung, November 1, 1921.

“Egon Schiele is not only the pioneer and main protagonist of Austrian Expressionism, and, alongside Klimt, one of the key figures in Vienna at the turn of the century, above all, he is the greatest draftsman of the 20th century. [..] In his drawing, watercolors and gouaches, the artist broke new ground: He captured his subject, usually the human body, with confident and powerful lines. [..] It is precisely in his well-thought-out drawings that Schiele took uncharted paths in terms of iconography and coloring. It is no coincidence that the artist's graphic oeuvre is valued as at least equal to his painting - the draftsman Schiele is even far superior to the painter Schiele. As a draftsman, he subsequently became a great inspiration for many artists of our time."
Quoted from: Leopold Museum, Vienna, www.albertina.at/site/assets/files/1979/pressemappe_egon_schiele.pdf.

"Sleeping Woman" dates to the early days of Schiele's relationship with Wally. The two had met in 1911, but it is evident that her predecessor continued to figure in the artist's life (and work) at least through the middle of 1912. Wally and another, unidentified, model appear together in several works from this time (e.g., Kallir D. 1111). In these and subsequent watercolors, Wally is distinguished by reddish-blond hair, often bound by a headband, and a broad mouth, while the other woman (sometimes referred to as "the black-haired girl") can be identified by her darker tresses and heart-shaped face. Though the "Sleeping Woman" does not have red hair, several related drawings (Kallir D. 1106, Kallir D. 1106a) suggest she may nonetheless be Wally. Schiele sometimes took liberties in rendering such details. Furthermore, Wally acquired a singular personality in Egon’s drawings only gradually, as the two grew closer (Kallir D. 1118).

By the time Schiele drew "Lovers", in 1913, he and Wally were an established couple. Still, Wally was not his only model during this period, and the face of the woman in the aforementioned drawing is too stylized to permit identification. The same may be said of the man. It could be Egon, or one of his male friends. Couples had previously been a recurring subject for Schiele, but possibly under the influence of his relationship with Wally, they became more prominent in 1913. It is, however, important to note that the artist's interest was not confined to heterosexual pairings. Intentionally innocuous titles such as "Mother and Daughter" (Kallir D. 1297) or "Two Men" (Kallir D. 1416), masked the erotic subtext of such works. At the same time, these double figure studies related to Schiele's contemporaneous allegorical concerns. He was also working on several canvases (never completed) depicting a mystic "seer" flanked by a row of standing acolytes ("Encounter (Self-Portrait with Saint)", Kallir P. 259, Conversion, Kallir P. XLIII).

In 1914, Schiele began a flirtation with two sisters, Adele and Edith Harms, whose family had moved into the building across the street from his studio the year before. At first the sisters resisted Egon's advances, and their parents certainly did not consider him an appropriate suitor. To counter their reluctance, Schiele dispatched Wally to befriend the girls and enlisted her as chaperon when he took them to the movies. Soon, Egon had focused his attention on Edith, the younger, fair-haired sibling. In February 1915, the artist informed his friend, Arthur Roessler: "[Ich] habe vor zu heiraten, —günstigst, nicht Wal[ly]."

Belying the title, the subjects of "Embracing Couple" are not a couple per se, but Edith Harms and her young nephew, Paul Erdmann. She is identifiable by her striped dress and turban, which she wears in a roughly contemporaneous photograph (see illu.). Paul appears in a series of 1915 drawings
—both alone (Kallir D. 1697) and with his aunt (Kallir D. 1798). "Embracing Couple" is closely related to this series, and it is possible Schiele incorrectly ascribed the drawing to 1914. The artist did not necessarily sign his drawings the moment they were finished, and he sometimes made mistakes when coming back later to date them.

Prior to meeting Edith, Egon had had numerous sexual liaisons with models who, like Wally, were at the time considered little better than prostitutes. The class divide between the artist's former lovers and his prospective bride was enormous. His confusion when confronted with the emotional demands of a properly bourgeois mate is reflected in a searing self-portrait with Edith, probably done shortly after their wedding in June 1915 (Kallir D. 1788). The marriage that ensued was marked by ups and downs. Through his experiences with Edith, Schiele gradually developed a deeper understanding of the female psyche that is reflected in his later portraits of women, but at the same time his erotic drawings became far less personal. "Sleeping Woman", "Lovers" and "Embracing Couple" evidence a process of discovery and artistic experimentation that is not seen in Schiele's work after 1915.