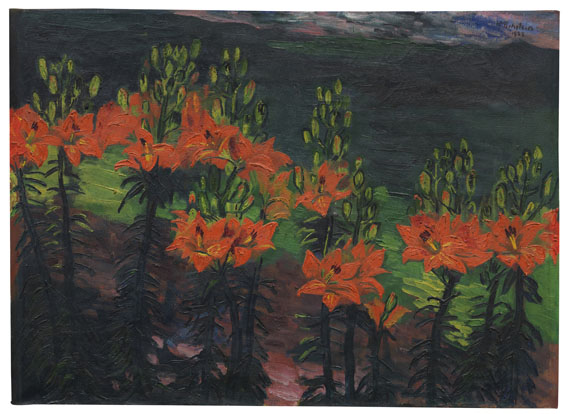 46
Hermann Max Pechstein
Feuerlilien, 1928.
Oil on canvas
Estimate:
€ 120,000 / $ 110,400
Sold:
€ 125,000 / $ 115,000
(incl. surcharge)
Feuerlilien. 1928.
Oil on canvas.
Signed and dated in upper right. Verso signed, titled and inscribed with the artist's address. 61 x 80 cm (24 x 31.4 in).
In the original frame.
• This is one of Pechstein's rare landscapes in which flowers are the only protagonists.
• Consistent provenance – the work has always been family-owned.
• Shown in museum exhibitions shortly after it was made and rediscovered in a North Rhine-Westphalian private collection only recently.

Accompanied by an art-historical expertise from Prof. Dr. Aya Soika, Berlin, dated October 26, 2022. The work was not known when the catalogue raisonné was compiled and is now registered in the unpublished archive of the 'Max-Pechstein-Urheberrechtsgemeinschaft', as well as in the archive of Prof. Dr. Aya Soika under the painting number 1928/12 .

"And it was worth it, that I spent most of this past year approaching this country in drawings, so I could give myself over to color for most of the summer."
Hermann Max Pechstein in a letter to Dr. Walter Minnich from September 24, 1928.

After the end of the artist group "Brücke", Hermann Max Pechstein attained new artistic maturity in the 1920s and 1930s. He had large solo exhibitions in Berlin's Kronprinzenpalais and the Kunsthalle Bern in 1921. In 1923, Pechstein was appointed member of the Academy of Arts and became a board member of the Berlin Secession. In the 1920s, Pechstein belonged to the luminaries of the Berlin art scene. "In any case, I made Berlin my new home, in addition to many friends, I also gained the recognition from the state. I received the Prussian State Prize. [..] I was also appointed a member of the Prussian Academy of Fine Arts. I was significantly involved in important decisions regarding art questions. Lectures and radio speeches on a regular basis" (quoted from Hermann Max Pechstein, Erinnerungen, 1960, pp. 109-11) In the mid-1920s, Pechstein found his way to a more painterly style. Still lifes and landscapes increasingly pushed portraits aside. Hermann Max Pechstein's special love of nature is well documented. Even at a young age, nature exerted a special fascination on the artist. For him it symbolized nativeness, wildness and freedom. Landscape and the harmony of man and nature would become the main motifs in the artist's oeuvre. In the course of his reorientation, the artist took up inspiration from many sources. Above all, it is the works of van Gogh that shine through in his landscapes. The palette also changed. The strong expressionistic components with effects based on, among other things, large areas in complementary colors, disappear in favor of a more differentiated style. Pechstein used broken tones to emphasize the landscape’s atmospheric character, as is the case in the present work. "Feuerlilien“ (Fire Lilies) is one of Pechstein’s few landscape paintings in which flowers are the only protagonists. The bright orange blossoms take center stage in front of a dark background. They are the only players on this stage, the surrounding space is merely conceived as a carpet of colors. The focus is on the shapes of the flowers and their bright colors. "Feuerlilien" may have been created during the summer stay in Rowe, where Pechstein spent the summers between 1927 and 1933, either working on his own at his holiday accommodation or plein-air. However, the painting could also have been created in Berlin after his return from his summer vacation and before it was submitted to the Deutsche Kunstgemeinschaft exhibition in mid-November. "Feuerlilien" was on first public display shortly after it was created and would remain unknown to research thereafter. Immediately after its creation, it went into the collection of Hermann Höpker-Aschoff, Prussian finance minister from 1925 to 1931, who knew the artist personally. The painting has remained in the family for almost 100 years and is presented here for the first time since. [SM]
More Information
+
Sell
Get a free appraisal for a similar object!
+
Register for
Hermann Max Pechstein
+
Buying from A-Z
+
Contact a specialist
+
Hermann Max Pechstein Biography
Share