Lot 26
Back side
Frame image 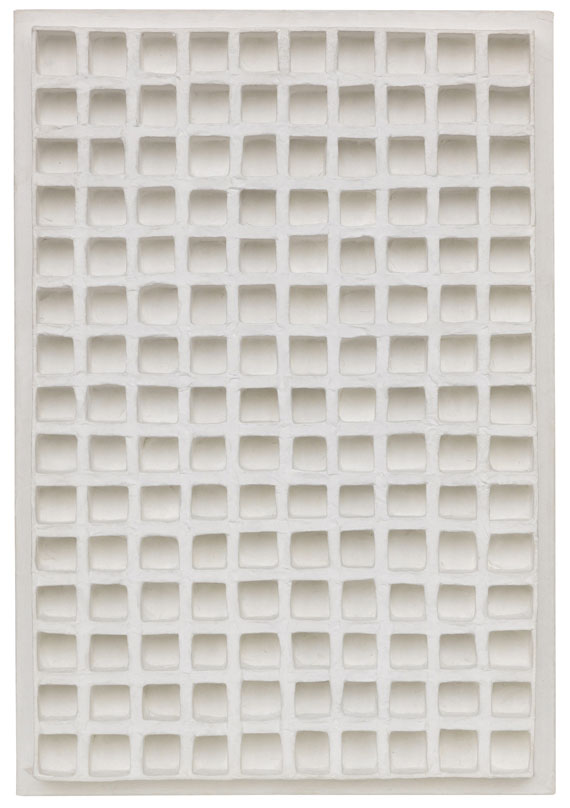 • Early, radically reduced relief by the celebrated Dutch "ZERO" protagonist.
• A similar work from 1970 is part of the collection of the Museum of Modern Art, New York.
• From the collection of the famous art historian Max Imdahl.
• In 2014/15, Schoonhoven's works were part of the grand "ZERO" exhibitions at the Solomon R. Guggenheim Museum, New York, and the Martin Gropius Bau, Berlin.
• Next to Manzoni, Fontana, Uecker and Castellani, Schoonhoven's monochrome main works count among the the most important contributions to European "ZERO".

We are grateful to Mr Antoon Melissen, Amsterdam, for his kind expert advice. The work will be included into the forthcoming catalogue raisonné.

"The square is perhaps the purest of the basic shapes, a kind of frame of reference for all the others."
Jan Schoonhoven, 1972, quoted from: Jan Schoonhoven, Delftse meester, De Telegraaf, January 12 ,1972.

"Even with formulation that are most faithful to the original, Max Imdahl, to whom we owe the best writings on Schoonhoven's work, remains aware of the unnamed excess in meaning of the white reliefs, their linguistically unrivaled."
Hanno Reuther, Künstler. Kritisches Lexikon der Gegenwartskunst, edition 9, p. 7.

Schoonhoven's reliefs fascinate with their formal clarity, artistic radicalism and technical perfection. As early as 1972, their unique character was described as "Cool, strictly ordered, well-considered. But also familiar, humane and intimate" (quoted from: A. Melissen, Jan Schoonhoven's silent white revolution, in: J. Schoonhoven, Zwirner Gallery, New York 2015, p. 15). Schoonhoven was a loner, pursuing his non-artistic occupation in the real estate department of the Dutch postal service during the day, before devoting himself to working on his reliefs at the dining table of his Delft canal house every evening. Due to the spatial context of their creation, the formats of his reliefs are usually limited to a maximum of around a good square meter. In 1956, Schoonhoven created his first monochrome white relief, "Motel," which was still based on his informal compositions of those years. Here, however, Schoonhoven already found his way to the anti-academic materiality of papier-mâché that would characterize his later work. However, it was the increasing formal reduction to strictly geometric rows of rectangles or squares – as in "R 70-41" – that was fundamental for the inclusion of the lively play of light and shadow in the following years. The basic structure of the square plays a decisive, almost prototypical role in Schoonhoven's work, since the artist seess it as the purest expression of a basic geometric form fundamental for all other geometrical forms. "R 70-41" is thus exemplary of Schoonhoven's work in a special way: It is based on a multiplied series of squares from which Schoonhoven developed a large rectangular composition.
Schoonhoven's reliefs inspire with their formal clarity, optical calmness and maximum objectivity. The famous art historian Max Imdahl (1925–1988), previous owner of our early relief, was a great admirer of Schoonhoven's revolutionary work, which defies all forms of figuration and artistic gesture. Imdahl described the object character of Schoonhoven's serial reliefs as follows: "The white reliefs are three-dimensional and, as such, palpable objects. They are objects insofar as they are what they are, that is, they do not represent or imitate anything they are not. [..] The serial consists in the repetition of the same. [..] However it is, depending on the relief, it is in any case always what it is, nothing else." (Max Imdahl, quoted in: Künstler. Kritisches Lexikon der Gegenwartskunst, vol. 9, p. 7.) Their geometric rigor, for which architectural structures such as walls, paving stones, and grids provided inspiration, leaves no room for a spontaneous, gestural artistic signature. Accordingly, standing in front of Schoonhoven's "R 70-41" we can experience what Max Imdahl calls the "active seeing": seeing as a basic aesthetic experience, free from the recognition of an object (cf. Max Imdahl, Jan J. Schoonhoven, R 74-8, 1974 (1979), in: Erläuterungen zur Modernen Kunst, Bochum 1990, pp. 226-230).
For Schoonhoven, the actual creative process primarily lies in the conception and the graphic design. In this way, Schoonhoven put one of the key artistic ideas of the Dutch "ZERO" movement, the "Nul" group, to which Schoonhoven had belonged since 1958, in a nutshell: the consistent negation of the individual artistic signature. Today Schoonhoven's monochrome main works, like the works of Piero Manzoni, Lucio Fontana, Günther Uecker or Enrico Castellani, are the most important contributions to European "ZERO" art. [JS]
More Information
+
Sell
Get a free appraisal for a similar object!
+
Register for
Jan Schoonhoven
+
Buying from A-Z
+
Contact a specialist
Share