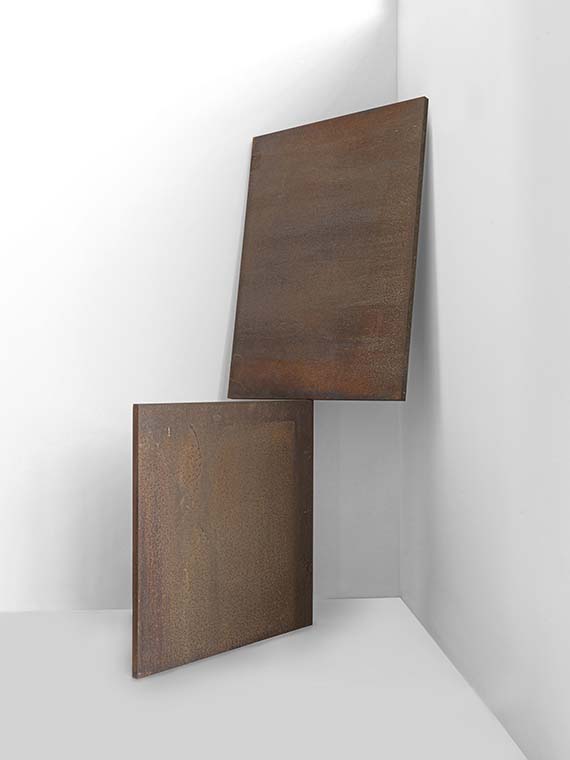 enlarge image
+
27
Richard Serra
Corner Prop No. 6 (Leena and Tuula), 1983.
Hot-rolled steel (2 parts)
Estimate:
€ 600,000 / $ 552,000
Sold:
€ 1,045,000 / $ 961,400
(incl. surcharge)
Corner Prop No. 6 (Leena and Tuula). 1983.
Hot-rolled steel (2 parts).
Unique object. Top panel: 195 x 150 x 5 cm (76.7 x 59 x 1.9 in). Bottom panel 150 x 150 x 5 cm (59 x 59 x 2 in).
The artist added the subtitle "Leena and Tuula" to express his gratitude to Leena Peltola, then director of the Ateneum Art Museum, Helsinki, and a colleague of hers, who were in charge of the work's first exhibition in context of the Ars 83 Helsinki . [JS].
• Signature Piece from the early group of the "Props“, which are particularly fascinating for their fragile balance between airiness and heaviness.
• Three years after the present work was made, the New York MoMA honored Serra as a renovator of sculpting with the grand exhibition "Richard Serra. Sculpture", which saw its continuation in "Richard Serra Sculpture: Forty Years" in 2007.
• Other works from this group are at, among others, the Museum of Modern Art, New York, Tate Modern, London, the Guggenheim Museum, New York, the San Francisco Museum of Modern Art and the Centre Pompidou, Paris
• This is the first time since 2016 that a unique piece by the sculptor is offered on the international auction market.

Accompanied by a photo expertise issued by the artist in 1983. The work will be included into the forthcoming catalogue raisonné of sculptures, currently compiled by Heidi Colsman-Freyberger, Richard Serra Catalogue Raisonné Project, it is registered in the archive with the number "RS-1069".

"You can build a structure under compression that implies collapse and impermanence and yet in its mere existence denies this."
Richard Serra, 1983, Interview by Peter Eisenman, quoted from: Richard Serra. Writings / Interviews, p. 144.

Richard Serra - Innovator of Sculpture
Richard Serra, one of the most important representatives of American Minimal Art, was only 36 years old when the Museum of Modern Art in New York planned to dedicate a first solo exhibition to his revolutionary sculptural work. William Rubin, then director of the Sculpture Department, noted the following about Serra’s today internationally celebrated work: "We felt that the pieces he had then been producing, most of them indoor and landscape-sited works, were of the highest order of creative energy and quality." However, for organizational reasons, the exhibition project at MoMA had to be postponed several times before it was finally realized with the first American retrospective "Richard Serra. Sculpture" in 1986. A good twenty years after the first solo exhibition, the Museum of Modern Art, New York, dedicated another important retrospective to Richard Serra's sculptural œuvre, which transcended all traditional spatial boundaries. "Richard Serra Sculpture: Forty Years" celebrated Serra as a spectacular innovator of sculpture.

The early group of works "Props" - Staging Perfect Balance
A prominent part of the first MoMA exhibition is also the group of works "Props", which is groundbreaking for Serra's oeuvre and includes our fascinating work "Corner Prop No. 6", as well as the two smaller but very similarly constructed works "5 S Corner" (1983, San Francisco Museum of Modern Art) and "Corner Prop No. 7 (For Nathalie)" (1983, Centre Pompidou, Paris) (fig.). What the sculptures in this series of works have in common is the confusing play with lightness and heaviness, the balance of the steel parts, which are only loosely connected to each other by pressure and gravity, meticulously worked out in numerous construction drawings. This is a form of construction with which Serra clearly goes beyond Barnett Newman's famous "Broken Obelisk", the top of which is still firmly connected to the base by an internal steel core. In Newman’s work, it is only the appearance of a fragile balance that becomes a fascinating reality in Serra’s art. Despite the immense weight of the material, this finely orchestrated play of physical forces lends Serra's multipart "Props" a fragile, almost ephemeral character. Serra once described this fascinating moment inherent in the works of this series with the following words: "When something is truly balanced, it becomes weightless. (R. S. 1983, quoted from: Richard Serra. Writings / Interviews, p. 144) The balanced construction makes Serra's huge arrangements, weighing tons, appear weightless and fragile in a unique way by staging the moment of perfect balance. And so it is not surprising that one of the works exhibited at MoMA at the time, with four steel plates leaning against each other, is titled "One Ton Prop (House of Cards)" (1969/86, Museum of Modern Art, New York) (fig.), which fittingly addresses this apparent paradox.

From then on, Serra showed a fascination for an aesthetic in which collapse and transience always resonate, as is the case with the present sculpture "Corner Prop No. 6". Serra summed this implicit contradiction up with the following words: "You can build a structure under compression that implies collapse and impermanence and yet in its mere existence denies this." (R.S. 1983, quoted in: Richard Serra. Writings / Interviews, p. 144). Serra's sculptures do not stand on a pedestal; as free interaction with space is essential for them, and it is this dissolution of boundaries that inevitably gives the viewer the feeling that, like a house of cards, they could suddenly lose their balance and collaps.

Serra and the discovery of the corner - "Corner Prop No. 6" and Malevich's "Black Square"
Starting with his creations of the 1960s, Serra began to redefine the concept of sculpture; not only can his work be observed from any angle, they have to be experienced in space with the viewer walking around them, and his later steel sculptures even allow observers to walk through them. In terms of form, Serra's oeuvre can be assigned to American Minimal Art. Always based on the contrast of black and white, in addition to the formal reduction to basic geometric forms, his reduction in color is also characteristic. Serra's oeuvre takes the principles of Constructivism and Suprematism, first and foremost the monochrome and sophisticated balance of Kazimir Malevich's compositions, into three-dimensionality and monumentality. "Corner Prop No. 6" seems like a tribute to Malevich's famous painting "Black Square" (1915, first version), which is considered a key work of Modernism. Just as Malevich attempted to free painting from the "burden of representationalism" with the "Black Square," Serra strives to break the spatial chains of sculpting. The fact that Malevich also provided an interesting starting point for the spatial dissolution of art is surprising, since Malevich presented the "Black Square" in 1915 like a Christian icon, just under the ceiling above the corner at the "Last Futurist Exhibition 0.10" in St. Petersburg. (Fig.) Accordingly, Serra's coup d’art of the two meticulously balanced steel plates placed across the corner is also characterized by an iconic contemplative aesthetic. At the same time, Serra's sculptural exploration of the corner is about the perfect development of space, an idea that Bruce Nauman refined in his famous video "Setting a Good Corner (Allegory and Metaphor)" in 1999. The fifty-nine minute video shows Nauman setting up a corner gate on his New Mexico farm. In the introductory text to the video, the artist emphasizes "that a good fence cannot be built or maintained without a good corner." (quoted from: https://www.tate.org.uk/art/artworks/nauman-setting-a- good-corner-allegory-and-metaphor-ar00576)

Serra's sculptural work - Monumentality and Aura
It is not a depressing monumentality, but one that delimits and decelerates the mind and the senses in an almost meditative act of viewing and understanding. And so Serra's sculptures and their interaction with space must be circumvented and comprehended in an act of deep concentration.
Serra has allowed us to wander around his over-sized steel formations since the late 1960s, exploring his masterful play with the balance of lightness and heaviness and discovering shifting references and tensions in space that must be experienced in an act of contemplation. And so it is little surprising that one of the latest mega creations exhibited at Gagosian Gallery since 2021 is titled "Transmitter" (2020, Gagosion Gallery, New York). 4 meters high, 17 meters wide, and 18 meters long, the structure consists of long, gently curved steel plates that reach into the surrounding space like a labyrinth, challenging our common viewing habits and the limits of our sensory perception. "Transmitter" proves once again how unique the aura of Serra's sculptural work is. Defying any reproducibility, it can only be fully experienced in front of the original. [JS]
More Information
+
Sell
Get a free appraisal for a similar object!
+
Register for
Richard Serra
+
Buying from A-Z
+
Contact a specialist
Share