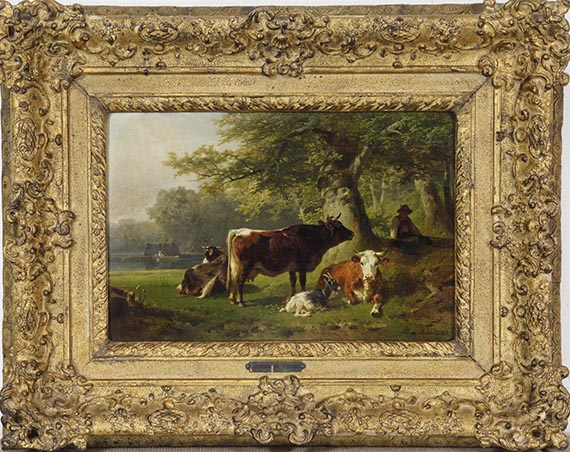 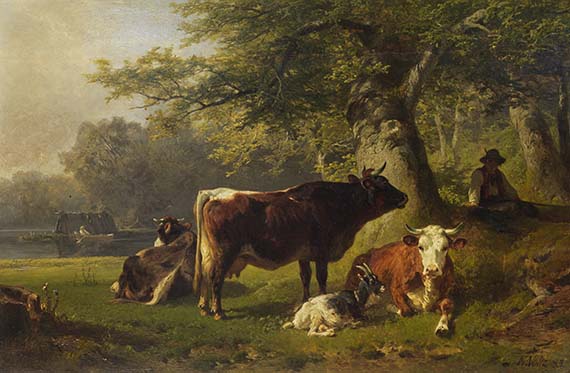 Having received his first artistic training from his father, who was a painter in his own right, Friedrich Voltz pursued further studies at the Munich Academy from 1834 onwards. In the main, however, he remained a self-taught artist. Initially, he ventured to the Munich countryside in search of motifs, specializing in landscape and animal painting. A study trip to Holland, where he was introduced to the landscape painting of Barend Cornelis Koekkoek and his circle who were influenced by the groundbreaking Dutch masters of the 17th century, proved to be a crucial inspiration. From the 1850s onwards, he worked closely with his artist friends Carl Spitzweg and Eduard Schleich the Elder. Several major collaborative works exploring popular themes of the Munich School – pastoral scenes or herds of cattle, horses and goats set against a backdrop of trees – bear witness to the mutual influence between Voltz, a distinctive draftsman and outstanding visual arranger, and Schleich, a pioneer of German outdoor painting. Ambient air and weather scenes, the even, mellow distribution of light in the landscape composition and the effective use of chiaroscuro contrasts all add to the special appeal of the intimate pastoral landscapes Voltz created in his studio. [KT]
More Information
+
Sell
Get a free appraisal for a similar object!
+
Register for
Friedrich Voltz
+
Buying from A-Z
+
Contact a specialist
Share