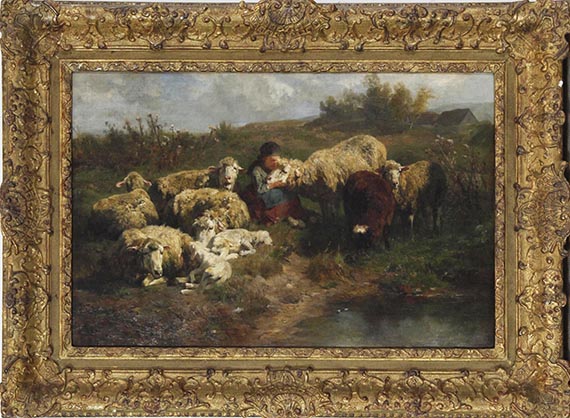 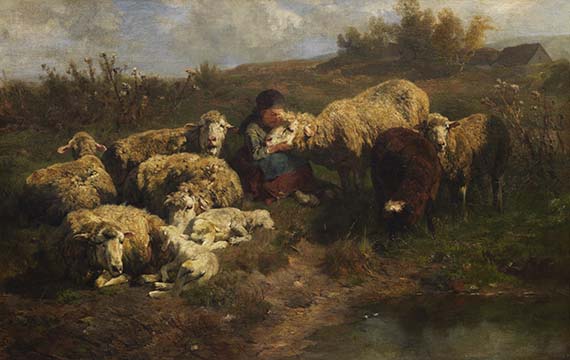 We are grateful to Dr. Judith Bihr, Museum Biberach, for her kind expert advice.

Anton Braith grew up on a farm in Biberach, which was under the stewardship of his father. While herding cattle as a child, he started to sketch goats, sheep and cows grazing on the meadows. In 1851, Braith won a scholarship and enrolled at the Stuttgart School of Art. After moving to Munich in 1860, his painting style was initially inspired by the Piloty school. Munich was also home to Albrecht Adam and Friedrich Voltz, two of the most important painters of animal motifs of the time. Having studied landscapes with animal portraits typical of the Golden Age in Holland, notably the works of Paul Potter, Voltz also devoted himself to the depiction of farm animals. While Voltz still focused on the precise rendering of animal species, Braith’s work, which is characterized by a more animated, lively portrayal employing an Impressionistic, free brushstroke style, represents a new development of the genre. Spending many summers in Upper Bavaria and at Lake Chiemsee with his friend Christian Mali, he was also in contact with various artists’ colonies. Increasingly, Braith also worked as an outdoor painter. While traveling with Mali to the 1867 Universal Exhibition in Paris, he was introduced to the works of Constant Troyon, a painter of animal motifs, which had a lasting influence on Braith. From then on, the artists devoted himself almost exclusively to realistic-dramatic representations of animals and successfully exhibited his works in Munich, Paris and Vienna. [KT]
More Information
+
Sell
Get a free appraisal for a similar object!
+
Register for
Anton Braith
+
Buying from A-Z
+
Contact a specialist
Share